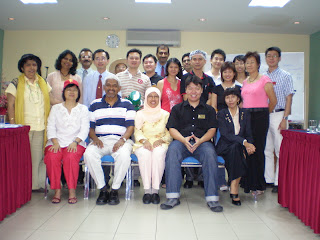 We had a successful joint meeting with The Malacca Toastmasters Club at the cosy The Semabok Inn.We were given a warm welcome and seated in a comfortable conference room.

Our stalwart member ATMB Lim Bing Yee whose present made us feel assured. It was great to have you joining us Bing Yee, a big hug from all of us.

When DUTM organises another joint meeting do jump in the band wagon it is exciting.

More great photos of the event (Click on the photo below):

Posted by D'Utama Toastmasters Club at 11:51 AM No comments:
Email ThisBlogThis!Share to TwitterShare to FacebookShare to Pinterest
Labels: Fellowship, Joint Meeting

It was our club's Humorous and Evaluation Contest.
The humorous Contest Chairperson was ACB Johnson Yike.
The Contestants were:
1, Peter Yu
2. Leong Hoe Wah
3. Calvin Lim
4. Eugene Ng.
The winner was Eugene Ng. and 1st runner up was Peter Yu.
The other four contestants were truly brave hearts .

Nine formidable evaluators.
The 2nd runner up - Johnson Yike, 1st runner - Vijay Balasegaram and the Winner - G. SIVALINGAM
Eugene Ng and G. Sivalingam will represent D'utama Toastmasters Club in the Area B4 contest to be held on the 4thOct07 at the same venue ie college KDU, time 7.00 pm.

I would like thanks the role players who had performed their duties superbly. Such a show ofspirit and enthusiasm. Not forgetting the members and guests who made the both the contest a success. My fellow contestants your participation go to show that competing bring the best out of us. It is better to succeed than to win. SAY YES TO SPEECH CONTEST.