First Time Toastmaster of the Evening 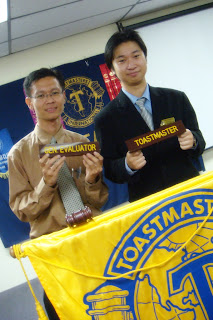 It was my first time being the TME. I was not very nervous before the meeting but actually felt a little worried that things might go wrong during the evening. I took a day off from work that day as most of the materials were not prepared yet although I have had most of the role players and speakers confirmed.

The atmosphere was rather cold initially as most of the members and audience came late due to the bad weather outside. It was unfortunate that some of the speakers were late too and I decided to start a little later to try and maintain the program. In the end, I had to start the meeting although the first few speakers have not arrived yet but with a little juggling around and some luck that they finally arrived, I would say there was no disaster.

Fortunately things got better after the break with more guests and members arriving. I guess after this, I will not take up the TME role again during the monsoon seasons. At least people will come on time when the weather is good. 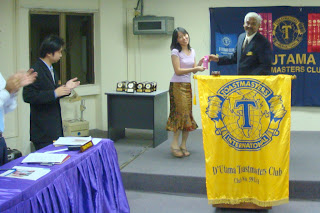 I would think that the meeting was a good one with a variety of speeches presented as there were 2 ice breakers and 2 C&L #10 speeches which allowed the guests to observe the contrast between the new speakers and the more experienced ones.

The guests were also able to witness 3 speeches from 3 different advanced manuals, thus in a way shows them that Toastmasters is a never ending movement and progress never stops. 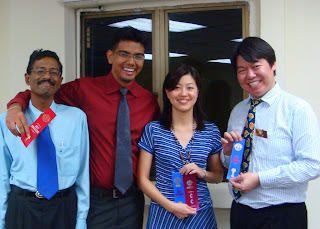 I felt that I could have done better and noted a few points for improvement after seeking the advice from some of the more experienced members. I would like to especially thank Calvin Lim as he never failed to provide guidance to me when I required them and also gave me pointers throughout the evening.

I will need to improve on my vocal variety and body gestures to hopefully make the evening a livelier in my next attempt as TME.