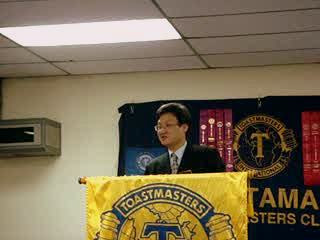 It was a rainy day, but the rain could not stop 37 brave hearts from flocking to KDU for the end-of-the-year meeting. Yes, we have a big turnout despite the rain: 25 D’Utama members, 2 guest-Toasmasters and no less than 10 guests gathered in Room 1.08, KDU for our first and only regular meeting in the month of December 2007.

We have lots of guests last night too – Two of them guest-Toastmasters, i.e. Azrai from IEM Toastmasters Club and May Yin from SJMC Toastmasters Club. The other guests include Asylynna’s mother, husband Azmi and son; Karine’s guest Andrews; another Andrew; and Yvonne (both Bing’s guests from the MNS); Ken; Joanne Tan’s guest Yee; and two others.

Thanks to all the role players, we managed to start the meeting on time … but as usual, no matter how we tried we just couldn’t end the meeting at ten o’clock sharp. But none of us was complaining – we just loves the fun and the energy. I was particularly pleased as all the role players turned out in full force, and that makes my job as the TME so much easier as I didn’t need to do any last minute re-shuffling of role players. In my years of Toastmasters experience and many TME roles, this is indeed one of the few occasions where role players are all totally committed to “JUST DO IT!”. Thank you, every one of you, my team of role players. 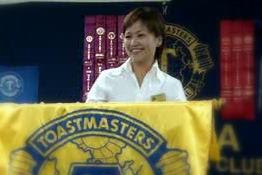 I must commend on the four first timers who not only took up the challenge to play their roles for the first time, and did a fantastic job! Toastmaster Jason Chew started the ball rolling as the ASA2, and he had to lead the singing of our National Anthem (Negara Ku) as we were without the tape recorder last night! Competent Communicator Leong Hoe Wah gave a good two-minute invocation speech to inspire all of us to “just do it”. And Toastmaster Joanne Tham showed us that beneath her serious outlook, she can be humorous too as the Humour Master. Best of all, she actually took the humour material from her personal experience rather than stringing up some internet jokes – well done, Joanne. To top it all, our ice breaker Toastmaster Asylynna was voted by the audience as the Best Assignment Speech Speaker for her maiden speech!

Up till Wednesday, I was still short of one very important role player, The ASA1, whereas all the other roles were already filled. But in D’Utama’s true spirit, help is only a phone call away – one phone call to Henry Fu, CC, and the problem was solved. Thank you, Henry.

Besides Asylynna, the other four speakers too mesmerized us with their speeches. Karine Koh spoke about “Fear Factor”; Jatson told us his “Toastmasters journey”; Teoh Chun Ming taught us to love our Mother Earth and to make it a better place to live in; while Competent Communicator Vijay was also in his element yesterday, to give a speech on “got astro-or-not?” 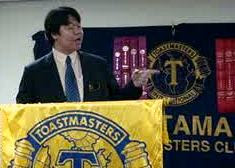 We have a very well-balanced and experience team of evaluators last night, ably led by the General Evaluator, Johnson Yike, ACB, ALB. Our Language Evaluator, Nancy Liew, ACB, CL, dangled a carrot in front of us and got almost everyone to use the Word of the Day, “mesmerize”. (The prize was won by Johnson for using the word most times.) Table Topic Evaluator Goh Sheen Yee, CC, could afford to be more thorough last night as she only had three speakers to comment on. The five speech evaluators, Lim Bing Yee, ATMB; Soh Fong Wai, ACG, ALB; Marcus Loi; Ooi Hun Beng, CTM; and Allen Kam, ATMB, CL, certainly gave the speakers very good feedbacks in the true spirit of Toastmasters evaluation. Allen Kam won the Best Evaluator’s ribbon.

Special mentions must be given to our Ah Counter and Time Keeper: Calvin Lim, VPE, the Ah Counter, did not just count the ahs – he pointed out to the speakers what the common ahs they each have, and I thought that was very good – it can make us more aware and hence lead to improvement. Time Keeper Eugene Ng, CTM, too did not just report the time and the fact that we were behind time, but actually pointed out why we were behind time – the time taken for our “commercial”; the transition time between speakers, etc, were the main time-stealer. I think that is food for thought for future TME – to factor in all the “unaccounted” timing, so that our programme sheet would be more accurate, time-wise. I would certainly do that the next time I take the job again. 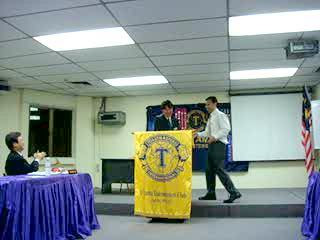 At the end of the meeting, I was very pleased that everything had gone smoothly, and all’s well end well. I believed all the Toastmasters were equally charged up and I could see there was a rush to sign up for roles in future meetings, everything else come secondary – our poor SAA and ASAs had to do all the packing and keeping of stuffs by themselves. I felt that this is something that we as members of the club should take note – we should help our SAA and ASAs to tidy up the place after meeting.

Despite having played the role of TME so many times, every time I do it, it is a new experience altogether. Especially so this time, as I was playing the TME again after more than a year, it is kind of de javou. I thoroughly enjoyed the evening and the experience. I must thank all the role players for all your help extended. Last but not least, my sincere appreciation goes to everyone in the audience (both members and guests), for your participation makes it possible. Like the old adage, “You can’t learn how to swim without getting wet” – so, members and guests, keep coming back, continue to engage and participate, remember yourself as successful, and the space is the limit... (after all, a Malaysian has already went to space...)

With that, I end my report of the D’Utama regular meeting held on 6th December 2007. Here is an early Christmas and New Year wish to every one: Merry Christmas and Happy New Year. May you be well and happy throughout the year 2008 and beyond.