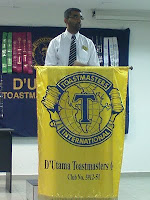 We had recently concluded another successful and fun learning meeting on 19 November 2009 led by our first-time Toastmaster of the Evening, R. Visvam.
His theme for the meeting is "Consistency" and it was indeed a very consistent meeting especially on the timing factor. Each activity/segment was following the agenda with the exact timing. This was indeed a very unusual phenomena and it was no coincidence. It was certainly the hardwork and good synchronization between TME Visvam and first-time time keeper Hafidz. Congratulations to both of them.

The last minute stand in ASA 1, Steven, did well in his role of greeting members and guest. He still came to the meeting even though he had some complications with his voice. Thank you Steven for always being there for the club.

We also proud to have another last minute Toastmaster, Li Ann, who took up the ASA 2. Although she had been taking leave from the club for a while, she still prepared well for the role. The meeting was started with a strong interaction among members. 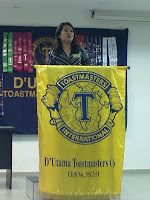 Yours truly was the first time Acting President presenting the opening address since our President, Chun Ming, was out of town. Nothing much to comment except that this is a great learning curve for myself. Thank you for all the supportive feedback from the crowd.

It was a creative attempt by the Table Topic Master, Nancy, for coming up with question alternating between the Word of the Day, Compatible and the theme Consistency. I believe that the questions were well received by the members. We had 6 speakers - Patrick, Siva, Bell, Joanna, Ginger and Kooi Ching. And not to forget to mentioned the generousity of Bing for giving the final speaking chance to Kooi Ching. The good handling of this session by having a brief and effective explanation allowed more members to participate. Well Done Nancy!!! 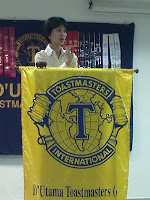 Toastmaster Wen Lee made a good attempt in giving constructive feedback to the table topic speakers. Despite the short 3 minutes given, she still managed to cover most of the speaker. In the future, the table topic evalution session would be given 4 minutes so that the evaluator can share more of his/her opinion which is important for everyone to learn as well. This meeting was blessed with the participation of 2 Area Governors, Jack Leong, CTM, CL (Area B5 Governor) and Henry Fu, ACB, ALB (Area W8 Governor) as Invocation Speaker and General Evaluator, respectively. Thank you for still making it to the club meeting despite having to attend so many other club meetings. 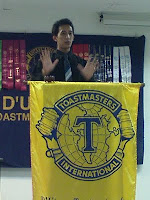 Humor Master, Bell, shared his recent experience in China. It was delivered in a plain manner but I can say that the audience really loved it. The room was filled with laughter.

The most unusual part of this meeting is having 1 project from CC#1 (The Ice Breaker) and 3 projects from CC#2 (Organize Your Speech). Congratulations to all speakers for moving another steps closer to becoming a competent speaker.
CC#1: Berry Eng with her title "Hey, now you know !!"
CC#2: Jonathan Moh with his title "The Two Sides of Cybergaming"
CC#2: Joanna Tong with her title "The End"
CC#2: Belinda See with her title "Golden Years"


Thank you also to all the speech evaluators, Bing Yee, Allen, David and Kooi Ching for putting in their time and effort to share their opinion on the speech. Evaluation is perhaps the best compliment for the speakers and motivate them to move forward in giving another speech.
Last but not least, we had Mei Lee as Language Evaluator and Sze Ling as Ah-Counter to comment on the usage of language and pause filler during the meeting.

I would like to thank all the role players and members for giving their best support to the success of this meeting.
Because of you, I have a fun, safe and enjoyable platform to learn.

At your service,
Marcus Loi
Vice President of Education 2009/2010
D'Utama Toastmasters Club
"No Road is Too Long"