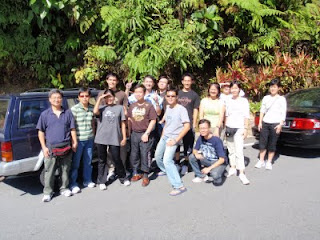 On 12th September 2009, 21 of us at D’Utama Toastmasters Club went up Fraser’s Hill for a weekend of fun, fellowship, food and more food!! A few dropped out at the last minute, which made room for Jason Tan and one of our newest members, Bell!

Getting up before dawn to get to our designated meeting point of KDU by 6.45 am, we began our journey while still bleary-eyed but all geared up for our trip.

The Pines Resort
After 2 hours, we finally arrived at the Pines Resort, Fraser’s Hill! We couldn’t believe our eyes! There was a welcome sign just for us D’Utama Toastmasters at the reception!

The hunt for treasure
The programme for the afternoon was a treasure hunt. We were broken up into 4 groups with 5 members in each. The groups were :
Blyth Hawk-Eagle (led by Joanne Tham)
Sizzling Hot (led by Sze Ling)
Halia (led by Calvin)
Group 4 (led by Jessy) 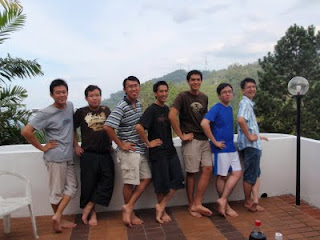 The winner was Group Halia, led by Calvin! (Of course it helped that they had a marathon runner on their team! And thus the debate over the real winner continues…)

The winning group walked away with a large bag of groundnuts. Tong Garden Shandong groundnuts, to be precise!

No getting away from Toastmasters …
After-dinner entertainment began with a Table Topics session (could you have expected anything else?) - organised and coordinated by Gan Teong Hock - and accompanied by red wine, white wine and sparkling grape juice! 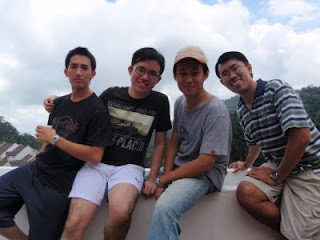 Questions posed were along the lines of “What would you choose to be and why?” First victim, er, speaker was none other than Club President, Teoh Chun Ming who garnered the question of “Which branded product would you choose to own and why?” and chose to speak about KFC! Thanks to Teong Hock’s careful planning, every Toastmaster had the chance to participate … there was no escape! After speaking, each speaker was to choose the next speaker to select at random a Table Topic question and begin talking. Other questions revolved around which cartoon character/animation character/actor or actress/American President you would choose to be and we had a good time laughing our hearts out at the answers!

Jessy Chahal provided the grand finale to the Table Topics session, being asked to narrate the rest of the story that began with “It is 2 am in the morning. You are typing on your computer and you hear a knock on the door.” In her story, she goes on to agree to join the International Speech Contest after much goading and persuading from fellow Toastmasters!

Ginger did the honours of providing the next thing on the agenda for after-dinner entertainment : the game of Mafia! First introduced on a previous trip to Cameron Highlands, this game was brought back to Fraser’s Hill. After explaining the rules and methods of the game to novices who have never heard of it, we all promptly began playing. The suspense of the game came from trying to pinpoint who the Mafia was in the group, responsible for naming civilians to be eliminated from the game during the “night” when everyone was supposed to be asleep. Everyone was straining their necks to look out for suspicious behaviours and giveaway body language to uncover the Mafia players. In the end, the Mafia was winning over the civilians in all games except for once, when the civilians finally outwitted and outlived the Mafia.

The game ended at 11.30 pm but it was not over for some. While a few took to bed right away, others chose to embark on a midnight walk through the night mist and cool breeze.

The morning after …
The night luckily provided a peaceful slumber for everyone; no one had to fend off attack from mosquitoes. Some chose to begin the day (at 7 am!) with Qigong and salsa moves while others remained under the covers.

Next on the agenda was running with Chun Ming! We saw Jason, Bell, Jatson, Joanne, Calvin, Jared and Marcus off at the starting line … with Marcus promptly making a U-turn; he had the wrong shoes on or so he said.

Bing Yee led the jungle trek portion of the day’s programme. Starting at 9.45 am, the trek revealed Jessy’s potential as a possible guide for the next Toastmaster’s trek! She managed to stay ahead of the group (more specifically, all the guys) throughout the entire trek!

Nancy led the way for horseriding. Each ride cost only RM4 with adorable ponies to choose from!

We played Mafia one last time and Jason delivered his farewell speech. Finally President Teoh Chun Ming presented Jason with a farewell card signed by all present, with Jason declaring that he will hang the card on his wall for all eternity … only for us to find the card left on the dining table on our way out!

Reluctantly we bade goodbye to Fraser’s Hill and to each other. But what a weekend! And here’s to many more fun gatherings in the future!

Acknowledgements and appreciation must be given to Bing Yee and Ginger who took the lead in organising this trip.
Posted by D'Utama Toastmasters Club at 8:15 PM
Email ThisBlogThis!Share to TwitterShare to FacebookShare to Pinterest
Labels: Fellowship
Newer Post Older Post Home