The Historic Area B4 Joint Meeting

The first ever Area B4 Joint Meeting was held on 17th December 2009 at D'Utama Toastmasters Club, largely in whole to the Area B4 governor, Calvin Lim, ACS who also happens to be D'Utama Toastmasters Immediate Past President. Here Calvin reports on what made him to decide to hold this meeting which was described as historic and how it all turned out! 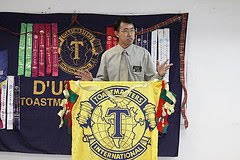 Area B4 governor, Calvin Lim is seen here chairing the last meeting held in 2009
that brought 4 different clubs together in the spirit of Toastmasters
As the year 2009 was coming to an end, Toastmasters members from Area B4 had our joint meeting on Thursday, 17th December 2009 at KDU College (in room 1.08), Petaling Jaya. I, as the Area B4 Governor, believed that there couldnt’t be any better way to end the year of 2009 with the fact that we enjoyed our “last” meeting of the year!

In conjunction with the year-end festival celebration, the joint meeting’s theme was appropriately chosen as “Have a Merry Christmas and Happy New Year.” The Toastmasters of the Evening, who was yours truly, felt that it was a blessing, a great and grand meeting to have D’Utama Toastmasters Club, Lafarge Toastmasters Club, Shah Alam Toastmasters Club and Kelab Pidato Kuala Lumpur (except for KNM Toastmasters Club – as they can’t join us); to come and have the “reunion” meeting as a large family.

There was exchange of ideas on how members from different Clubs, who had sent their role players respectively, have shown us their creativity and style of running the meeting. This included the assignment speakers and speech evaluators as well as they played a vital role in our Toastmasters’ belief; whenever they presented themselves before the audience.

This joint meeting is extraordinarily unique too because we had the meeting organized and spoken in a bilingual language – English and Bahasa Malaysia; and it was surprisingly to know that most of the audience have used Bahasa Malaysia language more effectively and encouragingly than the English language! Kudos to everyone as it showed that the Toastmasters members are not afraid to try something new for a change.

To conclude, we did enjoy the company of our friends and we hope that we will have more “reunion” meetings with other Clubs in the near future.

Click here to views photographs of the meeting, provided courtesy of Ian Cheong ...