The Youth Leadership Programme (YLP) is a Toastmasters programme designed to instill communication and leadership amongst the youth. Usually held at least once a year, D’Utama Toastmasters Club recently conducted their YLP on 18 & 19 December 2009. Garnering full participation from youths, the programme was officially a resounding success!
Steven Lai was the Chief Coordinator for the YLP and he writes: 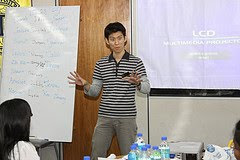 Steven is seen here speaking to the participants during the YLP
“The YLP had been possible because of the contributions from a lot of amazing toastmasters. It was great teamwork. Personally I have learned a lot from this programme – not only in terms of organizing the YLP but from everyone as we worked together. I never realized that I could manage 16 young energetic and boisterous adults for 2 straight days! But I am pleased with the results. All the toastmasters who participated in the YLP have in one way or another made a positive impact on those young people.”
Nancy Liew was one of the facilitators and mentors for the YLP. She reports the following: 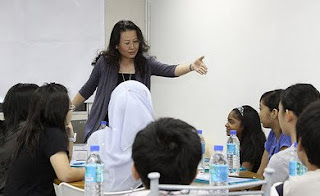 Nancy is seen here delivering the segment on Impromptu Speaking.
“Chief Coordinator Steven Lai had led the entire programme from start to end. He patiently and tirelessly built the youngsters' confidence in public speaking throughout the 2 days. Steven definitely inspired their desire to learn and helped them to overcome stage-fright and perform to the best of their ability.


It would not have been a perfect ending without the mentors, especially those who had taken up the roles of mentor for the very 1st time. During evaluations, Sheen Yee was very confident in her evaluation without resorting to notes, not for one mentee but two! Jatson Ho was very bubbly in his feedback to his mentees, and enjoyed speaking his mind. Wen Lee displayed extraordinary courage in her smooth evaluations. Levin had a lot of eye contact with the audience and projected great sincerity in his delivery. Sze Ling's words were expressive and almost flawless, carrying the listeners from start to end without any hiccups. Mei Lee was very calm in her analytical report, she spoke very clearly and never let her concentration falter. Ian, never tiring of carrying dual roles of speaker and photographer for many Toastmaster's events was honest and forthright in his feedback. Marcus kept it short and simple, and left the audience with a practical and effective message for improvements. Ginger was at her natural speaking best, displaying great ease with her speech delivery. And lastly Hafidz – himself a YLP participant 2 years ago who waited until he turned 18 and immediately joined D’Utama Toastmasters club once he was eligible – was simply amazing!
Other facilitators and seasoned speakers such as Poh Lin, Johnson Yike, Gan Teong Hock, Calvin Lim, Marcus Loi, and Lee Wei Seong are my idols. I have so much more to learn from them in Toastmasters.
I’ve just realised that it is exactly 5 years to the date since I took part in the YLP as a facilitator/mentor on 18 & 19 December 2004 which was organized by Lee Wei Seong then, at the same place. What a great anniversary to celebrate. But most importantly, it signifies one thing; learning never ends at any point in time, but is a continuous process. Progress and improvement takes place as long as we never stop learning.”

Having been a participant on the YLP organized by D’Utama Toastmasters Club 2 years ago, this time round Hafidz found himself in the role of a mentor. This is what he has to say about the whole experience : 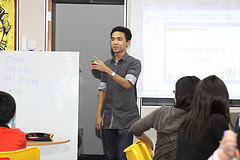 Hafidz is seen here delivering his evaluation of his mentee during the YLP on 18 December 2009.
“I find that being a participant and a mentor are 2 different things. Being a mentor gave me a chance to have a different view of the YLP programme; how it is set up and organized. It was like killing 2 birds with 1 stone; I get to be a mentor and learn and revise what I’ve learnt before. I also get to learn how to be a leader which is a good training ground. this being my 1st time as a mentor in any type of programme or seminar, I learnt not to underestimate people. Other than that, I also learnt the PIE method of evaluation! Last time they taught me the Sandwich method. Now it’s PIE and the XXX method of listening! I get the feeling that Toastmaster love food so much so that they apply food in methods of learning and teaching! Ha ha! Anyway, I’ve learn a lot from this programme. If there is another YLP, I would definitely like to be a mentor again.”


"Your Opinion / Feedback about the YLP Program?"


"What I have learned today?"