D'Utama Toastmasters heads off to Penang! by G. Levin


G. Levin reports on the fellowship trip to Penang:

On 26 February 2010, a bunch of us here from D’ Utama went for a trip to Penang for a Joint Meeting with Oracle Advance Toastmaster club and the opportunity to sample some of the best Malaysian cuisine! Those of us who went for the trip included myself, our President Teoh Chun Ming, Nancy Liew, Calvin Lim, Joanna Tong, Soh Fong Wai, Tan Kooi Ching, G.Sivalingam, G.Jayam and last but not least Jonathan Moh. 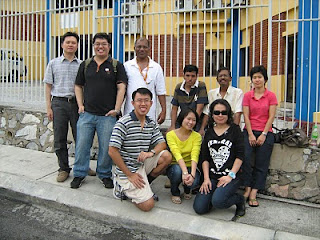 Meeting outside KDU before departing for Penang
We started the Friday morning packing our baggage into the two cars of our driver President Chun Ming and Fong Wai, most of us went together to be joined later by Marcus who was already in Penang for work. The car ride was relatively smooth and fast throughout the entire journey. At about 12.30 pm, we arrived at our first planned stop, Taiping which also happened to be the hometown of Nancy, where we were joined by Marcus.


We had lunch in one the local hawker centres where all of us enjoyed a bowl of ice kacang each. After lunch we visited some of Taiping’s local attractions such as the Perak State Museum. Much to my surprise, this museum is the first and oldest museum in Malaysia. The ground floor of the museum was dedicated to an exhibition of the many species of animals in the Perak State. The top floor was home to an exhibition of the early tribes of people of Peninsular Malaysia. I had not thought that the museum would be interesting due its relatively modest appearance from the outside. However, as the saying goes, “Don’t judge a book by its cover”. 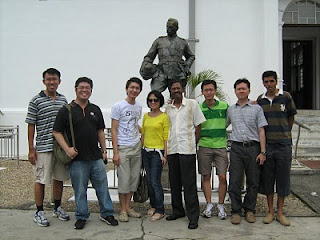 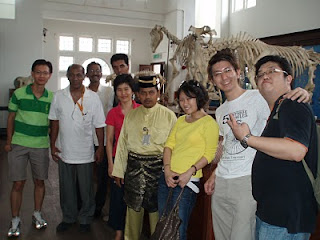 Posing outside and inside the Taiping Museum
Our next attraction in Taiping was the luscious Taiping Lake Gardens which is the first public garden established during the British colonial rule of Malaysia. Most of us took the time to enjoy the simple yet magnificent view of the Lake Gardens, evident from our extensive photo-taking with large trees and the huge lake. And with that, our short stint in Taiping came to an end. We were soon back on the road to Penang Island. 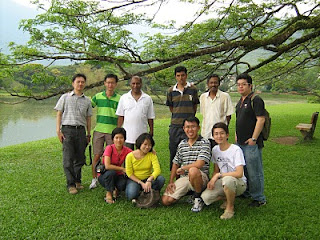 Posing for one last shot at the Taiping Lake Gardens before continuing on the way to Penang
We arrived at Penang just about after 4.30 pm, where we proceeded to check into Sri Sayang Resort Service Apartments located at Batu Ferringhi. After we settled in to our apartments, we proceeded to the beach where some of us took to banana boat riding and parasailing while the rest enjoyed the scenery and took more photos. Dinner was had in a hawker centre by the roadside, not too far from our apartment. After dinner we took the rest of night to do shopping along the roadside stalls. 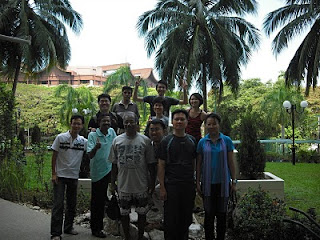 Outside the Sri Sayang apartments in Batu Ferringhi

Day two started out watching cartoons like a regular kid on a Saturday morning. Calvin, Jonathan and I discussed the difference between the cartoons of our generation and the current one, real heavy conversation. The morning was largely leisurely, with some of us went to have a dip in the pool whilst Marcus, Siva and I went into town to have breakfast which was a variety of dim sum offerings. Later Siva wanted to some shopping particularly at this shop called Zurina. The drive behind this shop is famous for selling premium brands clothing at substantially lowered prices. All of us regrouped together for lunch at a Taiwanese restaurant before proceeding to the Penang Sports Club for the Joint Meeting with Oracle Advanced Toastmasters Club!
The meeting finished at about 6.00 p.m. and we treated ourselves to drinks at the club, drinsk of a non-alcoholic in nature. Then we went for dinner at Pulau Tikus; D’Utama, Oracle Advanced, and other Penang Toastmasters who had all participated in the meeting. The main highlight of the night came when we visited Penang’s famous Kek Lok Si temple. The temple was especially crowded that night because all the lights of the temple were fully lit, in conjunction with the Chinese New Year celebrations. The latest addition to this temple that had just been completed revently was a pavilion which housed an mammoth statue of Kuan Yin. We endured the crowds and a long wait to gain a view of the Kuan Yin statue, which was spectacular beyond description. After our temple visit, some of us retired for the night while others enjoyed themselves playing fire crackers on Gurney Drive. 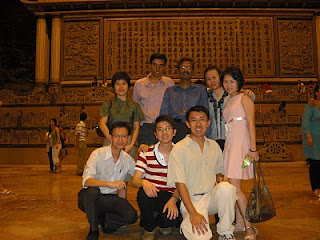 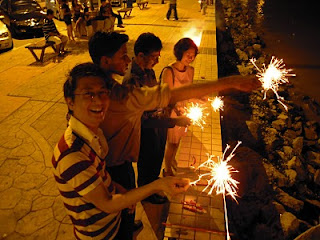 Playing fireworks along Gurney Drive
Sunday came, marking the end to a long fun-filled weekend. Sunday morning activities were confined to a trip out for breakfast. And after lunch followed by some last minute shopping we all made our way back home from what was a fantastic trip to the island that had rightly earned its former nickname as the Pearl of the Orient.
Note : All photographs have been provided courtesy of Nancy Liew
Posted by D'Utama Toastmasters Club at 11:20 AM
Email ThisBlogThis!Share to TwitterShare to FacebookShare to Pinterest
Labels: Fellowship
Newer Post Older Post Home