The Night Where Ghouls and Ghosts Convened! 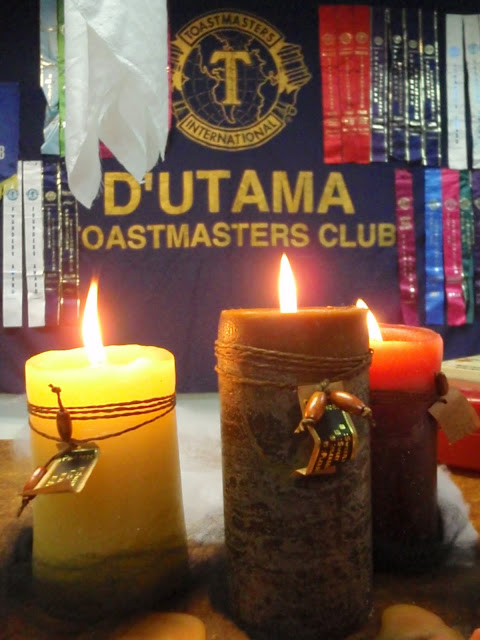 T'was a night when D'Utama Toastmasters Club had become almost unrecognisable and Toastmonsters shed their humanly facade to immerse themselves in their true forms; their supernatural unearthly forms ...

Fright Nite in the Haunted House

Nothing beats D'UTM Halloween Fun,
When ghosts and ghoulish beasties did come,
With witches, vampires and cereal killers,
All dancing cool to MJ's Thriller.

Do not scream or shake in your shoes,
Or feel that you need to pay your scary TM dues,
It's that time we meet on that OCCULT ocassion,
To claw, spit and hiss moods of persuasion.

'Drunkenly' lead by our vampish Countess Nancy,
Into the realms of 'Fear Factor' Fancy,
Many a brave 'Toastmonster' stood tall,
Upon the sacrificial stage in hope not to fall.

To keep the audience on their toes,
Jiving and laughing with humorous blows,
ATM 'Witch' Bing waved a wand of glee,
Unleashing a tale of 'Ping Pong' frivolity.

When 'Ghoulish Eater' (GE) Jonathon bounced on the scene,
Dramatic fears unfolded into a realistic dream,
Where mortals and monsters were warned to take heed,
As lurking about came the sounds of an uncanny deed.

Then Dr.'Donate-Your-Organ' Teoh zoomed in next,
While 'Under Fire, Quick-Fix' Mei Lee felt vexed,
As time caught them up as they executed their speech,
Forming great ideas testing their skills to teach.

Loads of fun and squeamish laughter continued to unfold,
Upon the 'Night of the Haunted House' as told,
But how do we know this happened at all,
Was it because of the leftover eyeball?

For do Ghost and ghoulies really exist,
And do vampires appear waiting for that bloody kiss,
Only you can decide upon what you think and do,
But what the heck Toastmasters "We love YOU!" 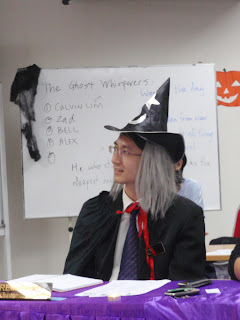 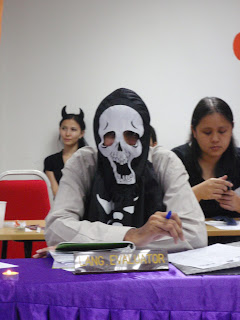 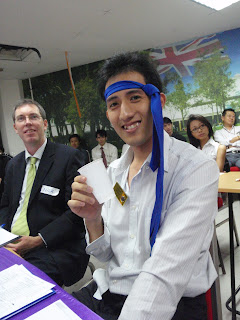 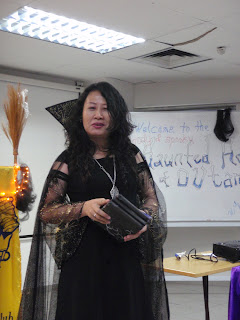 The leading witch of the night : Nancy Liew, ACS, ALB 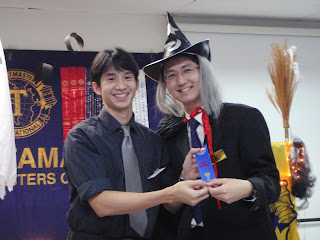 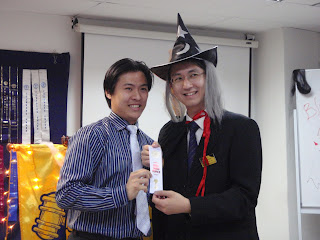 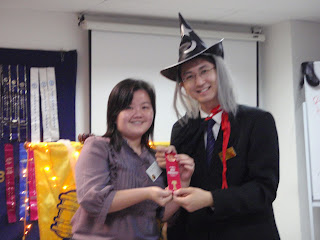 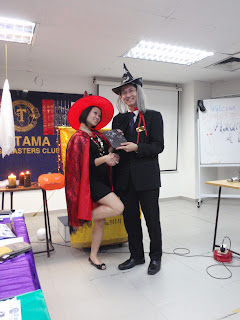 Joanna Tong wins one of the Best Dressed Prizes for the night and strikes a pose! 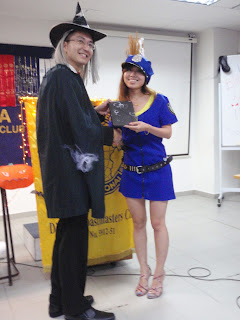 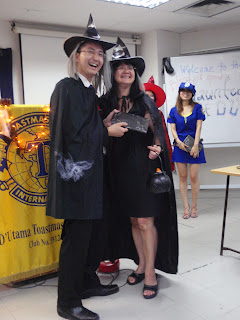 Another Best Dressed Prize winner: Lim Bing Yee and her mini cauldron of cockroaches and rats. Some members mentioned the food tasted a little different that night ... 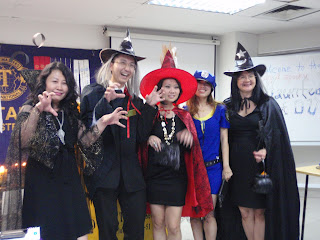 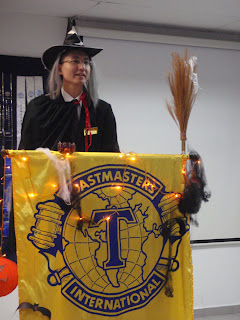 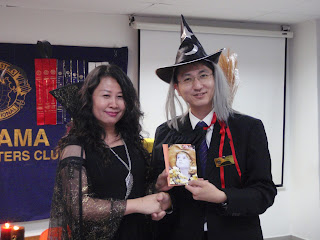 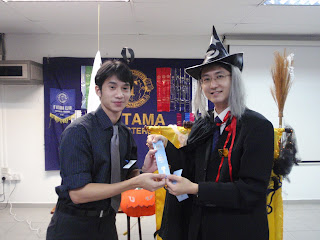 Datu Noornikam takes home the First Speech award, for having delivered his Icebreaker speech that night! 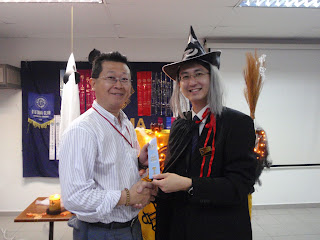 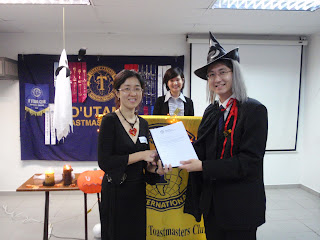 Stephanie has been accepted as a member of the prestigious Occult, which will be known to mere mortals as D'Utama Toastmasters Club the morning after. 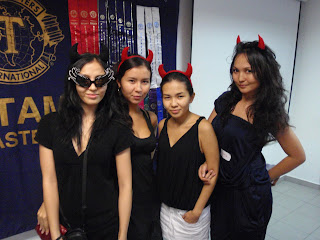 She-devils from Kazakhstan who came a-visiting! 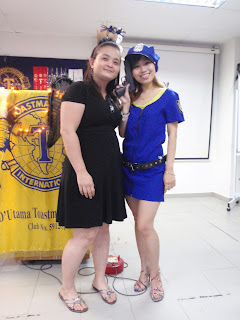 Ruth and Joanne  shows us how the pros pose! 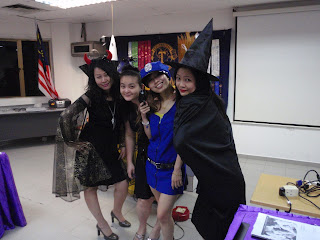 The supernatural beings who will have to resume human form after the night is over ... 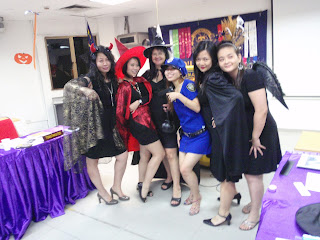 All the witches gather and cackle to their hearts' delight! 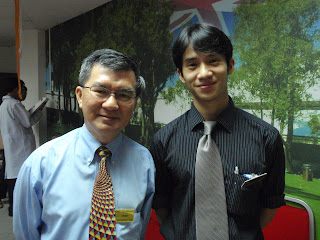 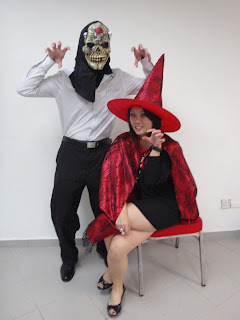 Bell as the Grim Reaper and his witch consort, Joanna Tong 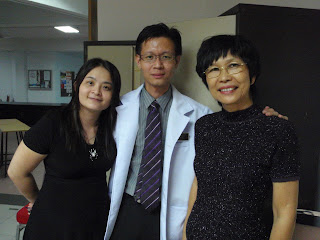 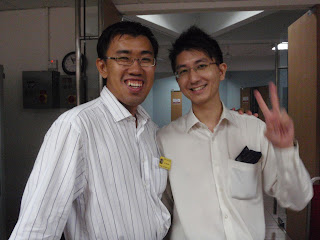 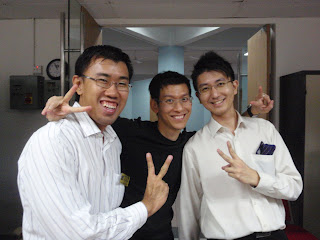 Steven Lai (formerly known as Scream) joins in the fun! 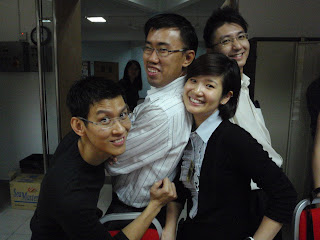 The gathering of the ghouls is complete with Vice-President Membership, Ginger Koh, in the loop 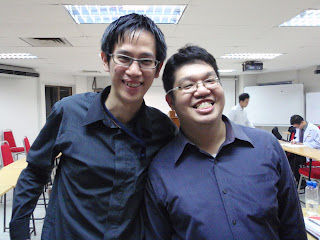 Tham (L) is a first-time guest and can't wait to come back for more! He poses here with Jonathan Moh!
Can't get enough of these pics? Check out this link : http://flickr.com/gp/shihian/JP4k32
Our next meeting will be on 4 November 2010!
Posted by D'Utama Toastmasters Club at 9:31 AM
Email ThisBlogThis!Share to TwitterShare to FacebookShare to Pinterest
Labels: Regular Meeting
Newer Post Older Post Home