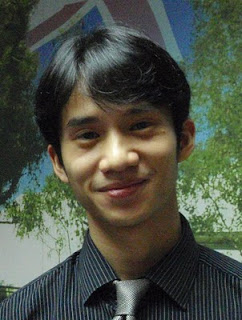 Nik Datu became a member of the D'Utama Toastmasters Club in October 2010 and delivered his Icebreaker speech in the same month! Here is what he has to say about the experience:
"When I first joined the D’Utama Toastmasters Club, I was absolutely impressed with the attention to detail in every aspect of the meeting. From start to finish everything was so organised and done to the letter. What impressed me most however was the skill of the various speakers at delivering their speeches and what more the impromptu session volunteers. I never really had much of a problem standing in front of a crowd and speaking but such skill with words and body language never came to me.


I recall signing up my name to give my first icebreaker speech and strangely felt nervous even though it was two weeks away. None the less I prepared my speech, and with guidance from my mentor, I completed it. I prepared my speech in point form, noting all the requirements of my icebreaker speech from the manual given. An important advice I picked up from one of the manuals was to have a good opening and a good ending, and memorize it if required. That way, you’ll start off as you want and you would begin to relax as the speech progressed. I remember thinking of worst case scenarios that could happen during my speech and though none of them came through, I was mildly intimidated at the number of people that turned up on that day.


On speech day, my name was called and I deliberately stepped up behind the lectern, feeling the need of something to shield me from the piercing but friendly eyes of the audience. As I stood behind the lectern, the first thing that went through my mind was the welcoming applause and the attention that was given to me immediately. Trying hard to hide any evidence of nervousness, I decided to start off with a small joke and to my amazement, everyone actually laughed which helped me to relax quite a bit. After which, I looked at my notes that I had brought with me and started with the opening that I had memorized.  From then on, the words started to flow a little better and the nerves started to relax a little.


Half way through my speech I realized I had missed some points that I wanted to share and started to wonder if I was going too fast and if I would meet the 4 minute requirement. Thankfully, as I began to reach the end of my notes, the green light finally lit up and I started off with my closing which I also had memorized. All in all, it was a wonderful experience delivering a speech in front of an audience of amazing speakers giving you their undivided attention. It has given me a great sense of motivation and I am without a doubt looking forward to performing better at my next speech!"
Note : Nik Datu delivered his Icebreaker speech on 21 October 2010 and won the Best Speaker award on the same night!
Posted by D'Utama Toastmasters Club at 6:04 PM
Email ThisBlogThis!Share to TwitterShare to FacebookShare to Pinterest
Labels: Exciting Stuff
Newer Post Older Post Home