D'Utama marked the 10th day of the 10th month of the 10th year of the millenium a most historical and memorable fellowship day !!! 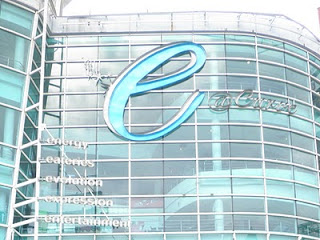 When Vice President-Membership a.k.a. the Organizing Chairwoman Ginger Koh called for the 10-10-10 Fellowship Day, fifteen of us sportingly took part in the bowling game at The Curve Kota Damansara. The venue is well placed in the centre of Damansara and caused no difficulty to locate. The ample parking space saved us much time to the access point and the lift led us directly to 3rd floor of Cineleisure Mall effortlessly. If anyone happened to arrive early, shopping at the bazaar in front of the mall should not be a miss! 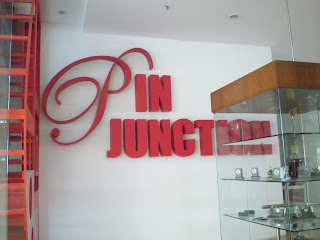 Pin Junction, one of the premier bowling alleys in Petaling Jaya, was the place we met to start the beautiful Sunday morning.
Ginger and her companions gradually turned up. We were eager to get the balls rolling, only to be informed that that system was not set up yet. So, we proceed to get something done to fill the time. 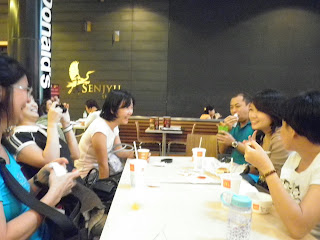 We switched to ground floor McDonald for some foods.   Ten of us, Ginger, Bing Yee, Mei Lee, Jason Chew, Viswam, Ben, Joanna, Karin, Li Ann and I mingled trading stories and jokes, sending sounds of laughter through the morning air! 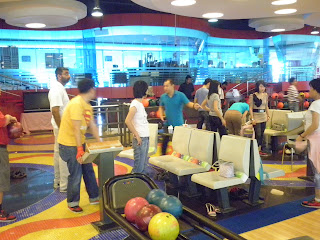 Soon after we were back at the bowling alley all well fed, everyone began the game. Firstly, we're advised to change the shoes. Each team was divided into 5 persons, 3 tracks were used for each team.  Upon the entering name of bowlers in the score board and picked up their appropriate sizes of balls, everyone got into their stride in the game. 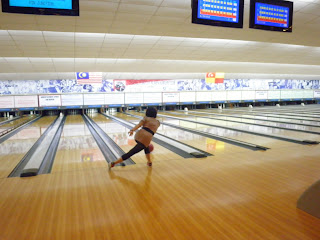 Joanna was the first one started the roll, her posture was feminine-pro! 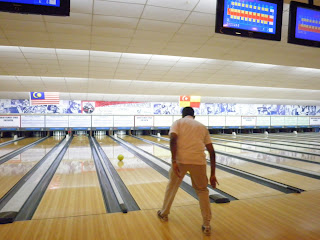 Viswam came with a not too slow, but steady roll out....  and scored! 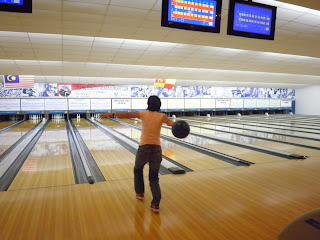 Mei Lee in sheer concentration from swinging the ball to taking down the bowling pins. 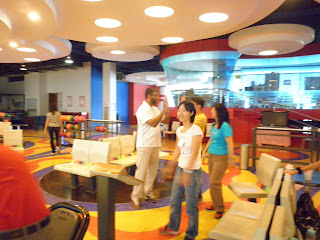 Jason Chew also gave it a try, resulting in a perfect strike! As time wore on, our arms felt the weight and fingers started to perspire. The balancing posture and strength of throwing the bowling really tested our skills. None of us were professional bowlers; at times, a few of us let the ball roll out off track, went down to the drain. But the experience was truly jovial! 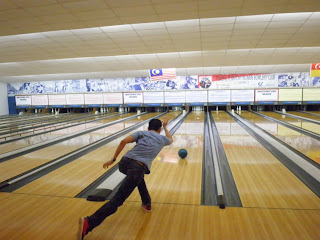 Amidst the perky delightment, Johnson, Poh Lin, David Chuah, Steven and his two daughters joined us. 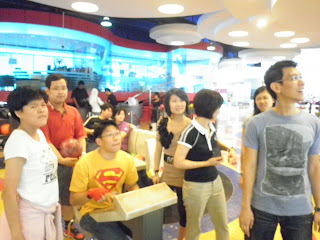 David jumped high as all the pins dropped completely! Steven seemed to be the most skilled bowler, made three consecutives perfect scores!   As the bowlers became caught up with each other,  the results shown vast improvement of everyone in the second part of the game!  The games continued to the finished line,  Steven recorded 132 points as champion, followed by two 1st Runner Up Ben and Mei Lee, and 2nd Runner Up went to David Chuah.

The overall game took about 2.5 hours.  The fellowship day came to the end at lunch time.  A few members bade their goodbyes and the rest continued with the 10-10-10 feast special at RM10.10+ treat at The Marche!
Posted by D'Utama Toastmasters Club at 12:10 PM
Email ThisBlogThis!Share to TwitterShare to FacebookShare to Pinterest
Labels: Fellowship
Newer Post Older Post Home