Why Toastmaster of the Evening? 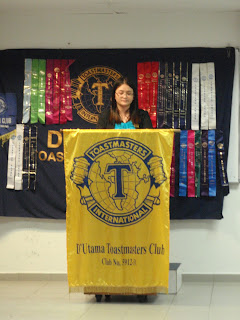 Ruth Ting became a member of D'Utama Toastmasters Club in November 2009 and recently took on the role of a Toastmaster of the Evening (TME) at the meeting on 18 November 2010. Here she shares about her experience as TME and encourages others to take on the role which most members would shirk away from at meetings. Ruth's theme for her meeting was “Try and fail, but don't fail to try”.

I had done emcee roles with my company & church events. Nevertheless, the high expectations I placed on myself prevented me from taking up emceeing again when I had encountered some glitches.
I would like to thank David Chuah who told me “You’ll get a guidance folder for you to start your TME journey with D’Utama”. I took advantage of the materials. I no longer worried what to say throughout the meeting. At least, I had prepared some parts of my speech.


My greatest fears were to encourage & convince others, speaking impromptu and last- minute changes which I needed to manage well.

Big thanks to the role players on 18th November 2010, especially 2 maiden ASAs (Yap Ying Shuen & Ho Liam Chang). They came with positive mindsets & attitudes (ie. Checking with members about what to do, let me know what they are confident in doing & the challenges they faced). This has eased my role as TME.
Looking through the packed agenda, I knew time was critical. I started the meeting without counting my sheep. I made some mistakes which I managed to detect later. Toastmasters is a place to make mistakes & learn from them.

I was very lucky to get supportive members who helped to guide me through my mistakes. Many thanks to Nancy Liew, Calvin Lim, Hoo Sze Ling, amongst others. I got my last minute stand in General Evaluator Yip Wah Pung. So what are you waiting for? Take up the role now & there are many of us willing to help you in one way or another.

Taking on the role of TME helped me regain my confidence. I developed skills in co-ordination, persuasion, motivation, time management, communication & leadership, I definitely look forward to taking on more TME roles in the future.