“It was a night. Oo-oo what a night it really was; such a night!” and so goes the lyrics of an oldie by the late King of Rock-n-Roll, Elvis “the Pelvis” Presley. A song that is probably familiar with Toastmasters from the Baby Boomers generation!

The lyrics aptly describe the electrifying ambience of our Club’s regular meeting on Thursday night of 17th November 2011.

When I arrived at KDU in pretty good time well before 19:30 hours, the first question I was asked by the VPE was “Did you bring the program for the meeting tonight?”

“Huh?” The other Toastmasters Club (MBTC) where I hail from, the member who sources for the role players (invariably that person is the VPE - 95% of the time!) is also responsible for preparing and printing out the meeting program.

So, my spontaneous reply was “There’s no printout program!” Blame it on the Murphy’s Law (Oops, nearly mixed up with the title of another oldie). Even though at every Club meeting, as far as I know, there is that ubiquitous paper program, this time there was none i.e. zilch!

“Damage control” was triggered and instantaneous recovery procedures were set into motion. Johnson Yike promptly wrote the short version of the meeting program on the whiteboard so that everyone could stay on track on what was and would be happening. Thanks Johnson!

The meeting got off on the dot at 7.30 p.m. with ASA 2, Andrew Chieng, leading the singing of the “Negara Ku “ and then welcoming everybody especially the guests. President Steven Lai took over control and addressed the audience with his opening speech and soon after invited dear me – the one who blundered earlier! – to emcee the meeting as the TME.

What followed then on was on auto-pilot – every role player knew his/her routine, when to step forward to the stage and when to exit with the TME and subsequently the GE orchestrating the various acts like clockwork!

It was awesome even though without the paper program to guide us religiously, the hand-written short version displayed on the whiteboard was good enough. Kudos to every role player and speaker for knowing your cue exceptionally well!

There were temporary moments of derailment by the TME and the GE when the usual routines went slightly awry and not adhered to stringently. “Getting a bit rusty” quipped the GE and so was the TME.

Highlights of the meeting were as follows :-
Overall, I enjoyed playing the role of TME that night. It refreshed my learning curve and skills as an emcee which have slackened somewhat. There is always room for improvement!

And to all the role players, thank you for carrying out your roles so gallantly and responsibly despite the “cheang, cheang, cheang” from the GE. With or without the printed meeting program, as far as our Club is concerned, the show must go on!

Last but not the least, heaps of thanks also go to the audience – toastmasters and guests especially to Ivy Fung, DPRO District 87 who has recently relocated to KL from Sabah - for being supportive, encouraging and lending your ears! 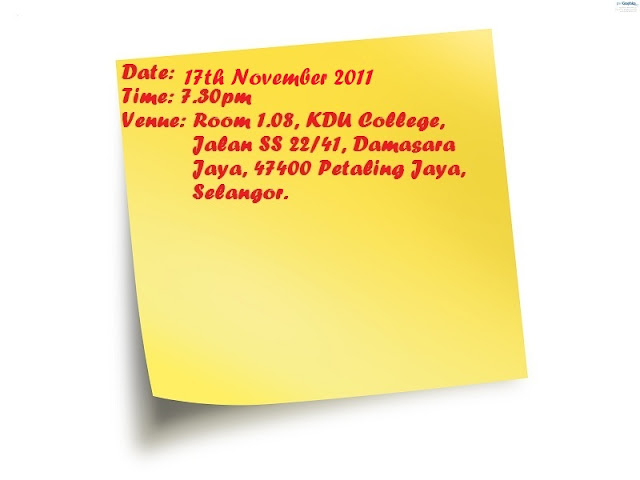 Posted by D'Utama Toastmasters Club at 8:41 AM
Email ThisBlogThis!Share to TwitterShare to FacebookShare to Pinterest

This morning, a whole FOUR of us from D’Utama Toastmasters Club went for a refreshing morning walk at Bukit Kiara Park! That’s Jonathan Moh, Lim Bing Yee, Shi Wei and myself. This morning walk had started a little while ago and for the most part, takes place almost every week. 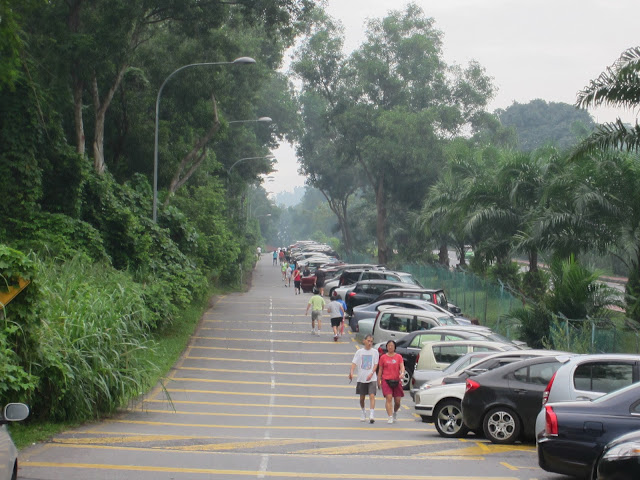 It does involve getting up rather early (maybe too early for some!) on a Saturday morning to be at the park by 7.30 am. However the effort is all worth it!

You are greeted by fresh morning air and nature’s green, and this never ceases throughout the walk! It rained lightly at some intervals but that didn’t dampen our spirits. The tarred pathways really make for an enjoyable walk. 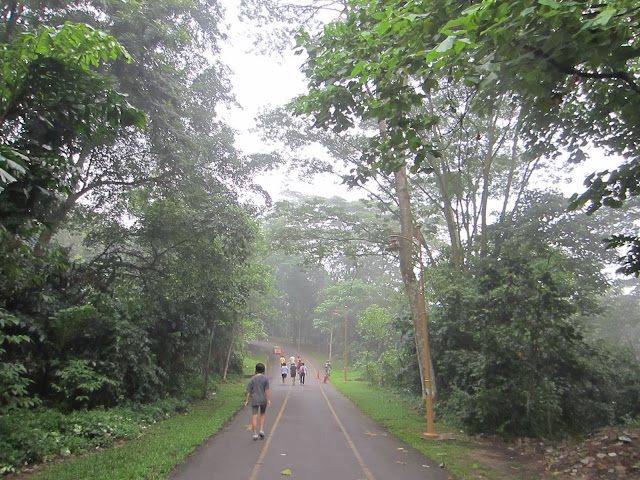 Though it was only the four of us, it provided us with the opportunity to catch up with each other on what’s been happening in our lives lately. Which is something we don’t really have time for during our regular club meetings.

After the walk, we had breakfast at one of the coffeshops in Taman Tun Dr Ismail. And guess what? Area B5 Governor, Nancy Liew also joined us! We started discussing plans to organize even more fellowship activities so members of D’Utama Toastmasters Club, you can be assured of fun and exciting stuff to get involved in!

Want to join us for the next morning walk? Keep a lookout in your mailbox for details!

Regular Meeting on the 3rd November 2011

Extracted from an email

Dear Jamie and All,

Having been 'away' for a few Club meetings it was great to get back into the swing of things last night, with a super session run by our fellow member Jamie Phuah(first-time TME). Well done young lady.

Initially before the meeting started I thought "Where are the people/members?" because it was pretty spartan to begin with. Thank goodness more members/guests trickled in by 8pm to bring more warmth into the room, that was kindly set up by Patrick Ho, initally.

I always have a lot of fun at meetings, whether greeting new guests,volunteering for table topics, impromptly playing roles if asked, mingling at break and chatting during our' Supper Club' afterwards. It was great to see other members doing the same too, like Nick T hanging outside as ASA 1 for a longer time than expected to make sure guests were welcomed, signed in and directed through the doors of Room 1.08. Our ASA 2 Jack played his first role without a hitch too , later to be accepted as a new member of the Club. Welcome aboard Jack along with our new members VK and the other two lovely ladies to D'Utama.


Although we were 'missing' our President, VPE and VPM  at the start of the meeting I must say kudos to Joseph, our VPPR, for bravely taking on the role of Acting President. You held yourself well and proved to be a good role-model for our guests to observe. Your speech #7 on the 'Family Virus' was apt! Hope our club doesn't go that way with too many absentees due to???? ...a' virus.' Keeping the Club healthy is important.


Listening to the wonderful speeches by Shi Wei on Mental health was educational along with the Kooi Ching or was that 'Kuching' give her take on how to run a meeting for her CL was refreshing. Good work Kooi Ching and congratulations to you on achieving your CL title.


It was also great to see Andrew Chien take on the role of Language Evaluator for the first time and deliver it in a clear and concise manner.

I think everyone who carried out a role last night did a wonderful job. Always adding hearty flavour to the night were our 'mature' members DTM Siva, DTM Johnson and DTM G,Jayam and of course not excluding our ex-Past Presidents ACS Nancy, ACS Gan T.H, ACB Teoh C.M and ACS Calvin Lim. What I think that makes our Club tick is the combination of the 'young' and 'mature' members making things happen. Also having a chuckle and fantastic belly-laugh sends off a 'feel-good' feeling after a hard day at work. Don't you agree?

Teh Tark for the Soul (Invocation Session)

Keep doing what you do best everyone for D'U.
Do have a happy weekend. 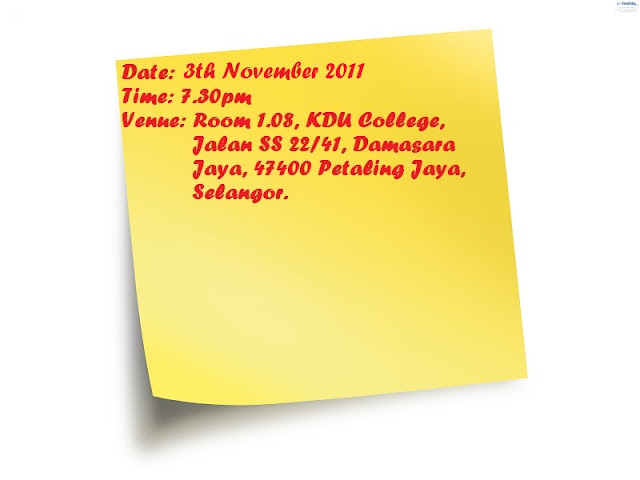