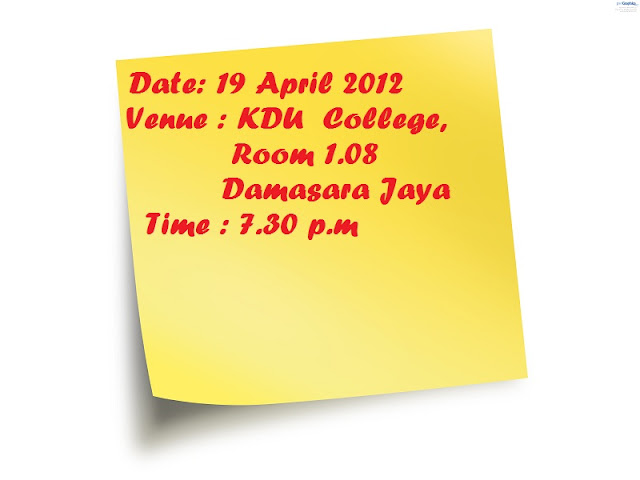 My First Time As TME

It all started during a night after our toastmaster club meeting when Wee Siong, Steven, Jack and myself were having our usual "Supper Club" session at the mamak store. Steven asked me if I wanted to try out the TME role. At first I was a bit reluctant but then I thought that it would be a good chance for me to try out being the MC of the night. So I gladly volunteered myself and asked Jonathan to sign me up as the TME for the 29th March 2012 meeting.

One thing I learned is that playing such role was not easy; it was all about coordination. It was tougher as it was a speakers' night meeting, and I was unaware of it when I signed up for the role. As per the speakers' night's agenda, I have to get about 5 to 6 assignment speakers. And that posted me a challenge because I was required to find and check with other members if they would like to deliver any speeches. And, as usual, it was not easy to get speakers as they need time to prepare for their speeches - especially for those who signed up for their advanced communication assignment.

I was glad that when the night arrived, everything went on smoothly despite there werr few glitches when forgot to ask the General Evaluator to read out the “Notes to Evaluator”, and also missed out a few other things. Nevertheless, it was a really fun and interesting night for me.
I sincerely thank those who had helped me by playing a role, giving advice, and being the participants during the meeting. Without them, this meeting would not be as successful. I am now looking forward to the up-coming meeting.