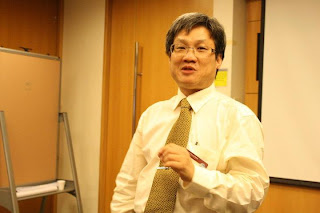 The Art of Effective Listening Workshop on 30th August 2012

The Art of Effective Listening Workshop

Managers, professionals and working people all face the need to listen to customers, colleagues, subordinates and senior managers, and understand precisely what they are trying to say. This workshop focuses on the following key aspects:

The workshop will be based on a mixture of mini lectures, and practical exercises, combined with debriefs.

G.Sivalingam is a leading trainer and consultant in the fields of written and spoken communications, especially high level presentations, such as reports. His focus is on helping writers and speakers to understanding their target readers, and craft the report or communication to get the key message across, in a way that the readers can understand, especially when complex or sophisticated information is involved. He is particularly skilled in helping professionals, who have very specialized skills, to make a strong impact on readers and listeners, including those who may have little or no knowledge of the field, and yet need to take action, based on the information provided. His clients include Astro, X-Fab Semiconductor, Indah Water, Malaysia Marine & Heavy Engineering, Mesiniaga, SapuraCrest Petroleum, and Poyry Energy.

Siva’s background includes a degree in Chemical Engineering, with 7 years experience in manufacturing, including several years in Quality Assurance work for medical product companies, plus 7 years experience in documenting a variety of software projects, including telecommunications and banking solutions. This experience, in addition to his consultancy work with Malaysian franchisors in understanding their businesses, and sharing that understanding with their franchisees through operations manuals, all give him a unique perspective in helping clients to improve their own communication skills.

If you are interested to attend, kindly help us to complete this simple registration form by < clicking this link >.
This is to assist us with the appropriate logistic arrangements. Thank you. 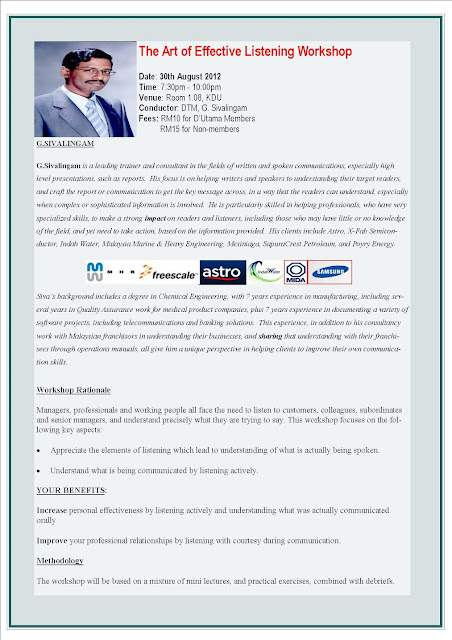 Posted by Kwong at 11:28 AM
Email ThisBlogThis!Share to TwitterShare to FacebookShare to Pinterest
Labels: Workshops 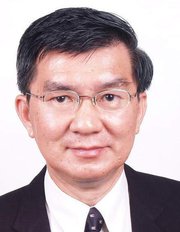 
Theme of the Meeting :"The only constant in the world is change"

If you're interested to take up a role, kindly contact the Toastmaster of the Evening (TME), Henry Fu (henryfu@unify.my) or Vice President - Education (VPE), Hoo Sze Ling (hooszeling@gmail.com).
Posted by Kwong at 12:29 AM
Email ThisBlogThis!Share to TwitterShare to FacebookShare to Pinterest 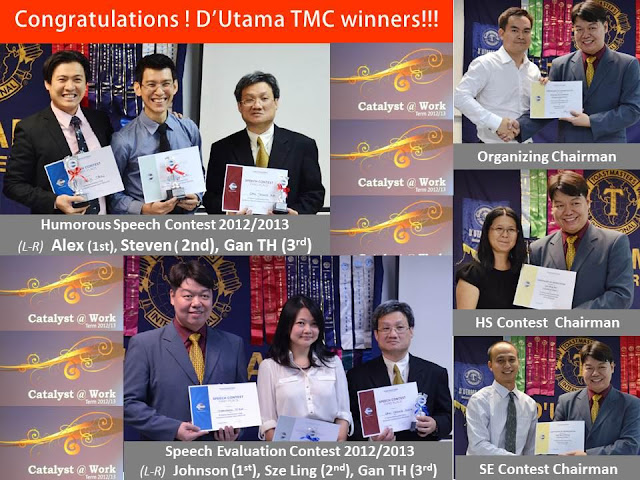 We had a overwhelming response on this year's contest by having a total of 8 Humorous Speech contestants and 12 Evaluation contestants participating in this contest event. The meeting had extended to close to 11pm and it was a fun night seeing all the participants delivering their best for the contest.

The results of the contests are as followed:

Alex Tan and Johnson Yike will go on to represent D'Utama Toastmasters Club at the Area B4 contest on 8 September 2012 (Saturday) at Lafarge Malaysian Cement, Damansara Uptown 3. More details will be disseminated closer to the date.

Congratulations to all the winners!
Posted by Kwong at 5:31 PM
Email ThisBlogThis!Share to TwitterShare to FacebookShare to Pinterest
Newer Posts Older Posts Home
Subscribe to: Posts (Atom)