A write up from Jack and Billy for the trip to Fraser's Hill: 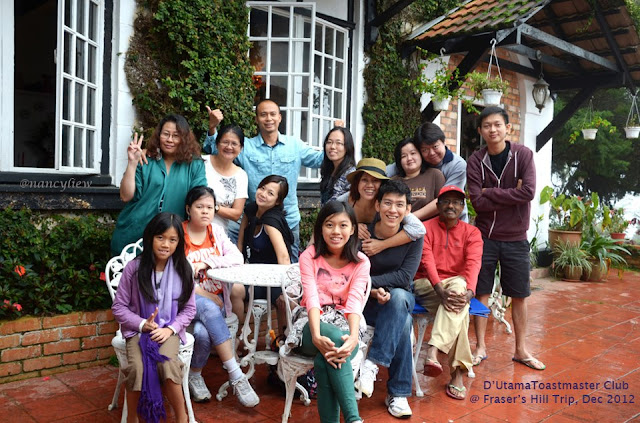 Its an early Saturday morning at 7am we were already gathering in anticipation of the fun and thrills that awaits us in Fraser's. Yes that's right, we are heading to Fraser's hill . Along the way we stopped for a short break in the Restoran Jejantas at Sungai Buloh and then another break at Kuala Kubu Bharu. We had a challenging time keeping up with Bing's Car. Guess she can't wait to see the birds.

Upon arrival we started off walking in the “Hemmant” trail, Bing, of course, is our tour guide of the evening. It was a wet morning so we were careful on our steps. Bing pointed out some of the trees and flowers to us but I was taking my dose of fresh air, ahhh..  i'm so addicted, since we don't get it very often in the city.

After the wet walk we went to the “Bird interpretive center” to learn something about birds. Finally we checked in to our rooms at The Pines Resort. Part of the gang went to rest after a tiring journey, for those with energy, we went out for a walk along the roads. Much to my amazement, I learned that Tarantula does exist in Fraser’s Hill. They were furry and they liked to hide in their own burrows covered with some leaves to avoid disturbance. We managed to see only 1 live Tarantula but that was enough for me to boast to my friends.

Towards the evening, the fun began with funny games. Thanks to our fun loving toastmasters. Some silly guy suggested Twisters, I think that was me. So most of us had a very good stretch after the game and who would have guessed that Alice and Kerryn (Steven’s 2 kids) beat us all flat.

After dinner, we had another dose of game called “Taboo” where each team had to guess the correct word behind the card which is described out by the partner without using the word itself. 2nd game was the fun part; the “Mafia” is a game which requires the power of strategic thoughts and social skills by a guessing game. The ability to read people is essential to win the game. I would love to play it again this time we will pay more attention to the pros, ie Bing & Johnson.

Of course we all wanted to save our best laughter for The Prank of the night where we had to find a victim who hasn’t played the game, and that is me. I was told to participate in a banana eating competition “Blindfolded”. The others quietly moved away from the scene and I was pranked live on video cam.

All in all we had a really fruitful day of fun and fellowshipping, and then we went to hit the sack.

After a few hours of recharge, the bird watchers (Bing, Billy, Jack and Sheen Yee) get ready at 7am to head out to Jerai Resort for the fun and exciting bird watching. Sze Ling also went along with us, she wasn’t into bird watching but a short morning jog back to the resort.


It’s amazing to see the birds feeding on the moths. I’ve never seen anything like this before except on TV.  Bing explained to us on the name of the birds and taught us how to identify one. They are Spectacled Laughing Thrush, Javan Cukooshirike, Black and Crimson Oride, Lesser Racquet-tailed Drongo and Large Billed Crow just to name a few.  People from all over the world purposely pay thousands of dollars to go Fraser’s hill for bird watching and photography. We are lucky enough to have an expert to lend us the expensive binoculars for bird watching and also thought us on identifying birds for FREE. It’s priceless.


After 2 hours of fun in bird watching, we went back to the resort for breakfast. Sze Ling joined us few minutes after. We were learned that her short morning jog turned out to be 10KM+ for her, she took the wrong turn.  She took about 1 hour and 30 minute to reach the resort which I think it’s fast considering the distance she ran.


After the breakfast, we all went to the Smoke House which had been in Fraser’s Hill since World War I. It was built by the British. We had light refreshment, nice chat and plenty of photographs.  There was where our group photos were taken. Nice job, !


Overall, we all enjoyed the trip. Everyone had fun!