A Relaxing Weekend In Ipoh

It was nice to attend a semi annual convention in a city without the nightmare traffic jams encountered in KL. This is what I experienced in attending the 2013 Semi-Annual Convention in Ipoh, on 8 and 9 November 2013. It still takes some getting used to a semi-annual which only lasts 2 full days and is over by Saturday midnight, sort of like Cinderella's coach which turns into a pumpkin at the stroke of midnight. The unique things at this convention, from my perspective were that every delegate received a fresh pomelo upon registrations, and I hereby certify that it was delicious upon consumption. The other thing was that the convention t-shirt was very nice; it looks very presentable with a stand up collar and a zip instead of buttons, and I can actually use it for business casual purposed. Alas, it was not free and I had to spring RM30, but I must say I don't regret it.

It started on Friday morning, with the District Exec Meeting in the morning at 10, followed by the District Council Meeting at 2, and the memorable thing for me was that not one hostile question was raised, and everything went swimmingly, and we actually finished ahead of schedule, which as a 15 year veteran of conventions, I cannot ever recall having witnessed. The night was of course the grand opening, and that went quite well with a sit down Chinese dinner. One surprise was that a winning bid was put in for the 2015 Annual Convention in May, and it will now be held in Langkawi, roughly 18 months from now.

The contest started at 830 on Saturday morning, and it was the highlight for the convention. The sad thing was that there were 2 time disqualifications in the Humorous speech contest, and one of them appeared to be one of the most humorous speeches of the day, which many of us expected to win or at least be placed in the top 3. Nevertheless, I have no quibbles about the winner, who was a breath of fresh air, with his prop of a giant chicken doll, his very original material, droll delivery and his live prop of a gorgeous lady who was presented as his wife. This lady later revealed the truth, with the inimitable phrase, 'The chicken hired me', when she did a hilarious 5 minute stage presentation about her quest to find a husband. This was something unusual, as she did this 5 minute presentation during the 5 minutes in which the Evaluation speech contestants prepared their evaluations, which I thought represented good planning and innovation, rather than allowing the 5 minutes to be an airtime slot, or just sit around.

The night gala was a hawker themed dinner where so-called hawker stalls were arranged around the hall, but the only problem was that the food was prepared by the hotel, so it tended to be on the cold side, as the food was cooked in the kitchens and served early, particularly for dishes like chicken satay, which was actually quite tasty. Yours truly, Johnson and Chun Ming got the opportunity to go on stage and collect our club's President's Distinguished Club program from the Immediate Past District Governor,DTM Ramdas. I thought it would have been nice if more of our club members could have been there for this recognition of our club. The dinner ended at around 1130PM with the formal closing of the convention, and that was it.


The next stop is the annual convention in May 2014 in Kuala Terengganu, on the east coast, the first time it has ever been held there. 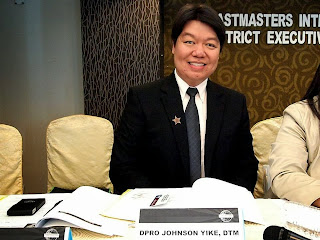 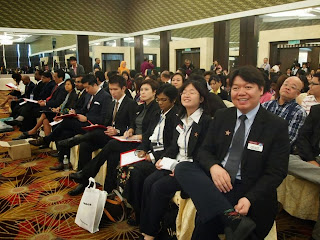 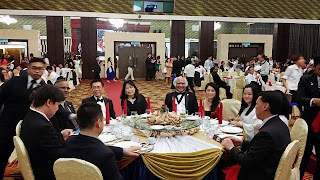 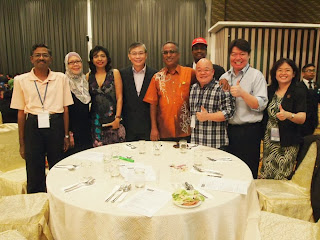 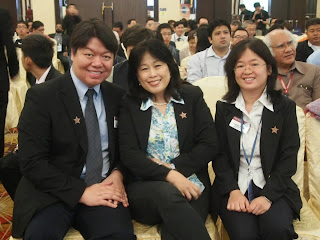