Our next meeting is the coming Thursday, 2 Apr 2015. This meeting will be spearheaded by one of our newest members, Argustin Mok (applause...)

The format of this meeting will vary slightly from our regular meeting as we strive to conduct an exciting meeting session for all our members and guests. Besides the assignment speeches, we have a distinguished guest, Alex Lu, who will be giving an hour talk on "Equity Investment Made Easy".

There are still roles available for grab during the meeting. Please come and play a role and render your support to our first-time TME. It will be an interesting meeting!

Our Joint Area D2 & D4 contest is around the corner.


Our club is entitled 10 free tickets. The 11th ticket and onwards will be RM12 each.

Please kindly reserve the ticket from me by March 23 (Mon). It's first come first serve.

All the best to our Yew Choong, Calvin and Gan!

Members, please make time and come to support! See you there.

This first Youth Leadership Program for the term 2014/2015 was held at Taylor’s University Lakeside Campus. It was a cool Saturday morning and the members of D’Utama Toastmasters Club were at hand to conduct the public speaking workshop for 16 young and energetic youths.

The program kicked off with Tan Kooi Ching, the ever-bubbly Chief Coordinator. She invited everyone to introduce himself/herself i.e. both participants and mentors.

The Ice-breaker session was conducted by Ryan Tang which was aimed at getting the participants to mingle and get to know each other a little better.
Kooi Ching took to the stage again to present an “Introduction to Public Speaking”, setting the agenda for the next 2 days. This was followed by a session on “Impromptu Speaking” delivered by Steven Lai who gave very useful tips on how to speak effectively off the cuff, without any preparation or warning whatsoever.

Ryan Tang also delivered an Ice-breaker speech, demonstrating to the participants an example of how such a speech can be done. This type of speech is geared towards getting the speaker to introduce himself or herself to the audience so that they will know the speaker better than before the speech was delivered.

The mentors present on the first day were:

Kooi Ching rounded up the entire day with teaching the participants how to control their fear when they are about to speak in front of a crowd.

Before the session ended, all the participants were invited to give their feedback on what they have learnt and benefited from the training given that day.

Henry Fu made a brief visit in the latter part of the afternoon to observe the conduct of the training and spoke with the YLP Co-Ordinator and the mentors.

It was totally an interesting Saturday morning as I remember being exhausted the week before. I woke up at 7am after receiving a “wakeup” call from Bing Yee (Bing Yee, sorry for the delay), hurriedly packed my bags and head off to unwind myself with a group of cheerful company. I had 2 rounds of breakfast along the way because I was feeling very hungry. Then, Bing Yee and a convoy of cars brought us up to Frasers Hill. I thought the breakfast was superb until I realized that I might throw up on the snake-like road to the top of Frasers Hill! Along the way we stopped at a waterfall with fresh clean water and took a couple of group photos and then continued our journey. The sight and smell of the natural forest is pretty amazing and relaxing if you wind down the car window during the ride.

After 2.5 hours, we arrived at Frasers Hill Pine Resort. Yeay, I didn’t throw up instead felt great! After that, we went on the simplest trail called the Hemmant Trail. Bing Yee caught sight of a juvenile brown snake as lucky Boon Wei stepped near it. Everyone was alerted to the sight of the snake. I caught a last glimpse of its tail as the snake wheezed and hissed its way out of the trail into the forest. We heard gibbons’ distinctive calling in the forest, which is an indication that the forest is still very livable, sustaining wildlife biodiversity. There were a lot of wild green ferns along the trail. Out of the trail, Bing Yee showed us a tiny plant with tiny white flowers and its roots smelled like the carbonated root beer; it belongs to the sassafras tree family, the same family as the plant mankind used to create the primary flavor of the root beer.  We had a long walk around Fraser’s hill and stumbled upon the famous Fraser’s Hill clock tower. At the bird centre, I remember reading that the Fraser’s Hill was discovered in the 1890’s by Louis James Fraser.

After a fantastic dinner at the resort, we settled ourselves down for games. We had a game with numbers and another game called mafia. I realized that some of us aren’t good with numbers and ended up swallowing more bananas brought by Bing Yee than necessary when the inadvertent mistakes in counting was made! On the other hand, the mafia game was just as exciting for me as I was the narrator for the game for the first time. People with the mafia role turned themselves into double agents which baffled me. By this time, we have already gobbled up lots of chips, chocolate sweets, tea, cupcakes, biscuits, grapes and not forgetting the exotic giant bananas that we brought along this trip. When the night turned cool, dark and quiet, we dismissed ourselves for a good night’s slumber.


Grace Sim:
Horse riding was an exciting yet thrilling activity for me. I was on the horse for the first time. I had the fear of falling off the horse at the great height and mixed with the happy feeling of riding the horse. I felt so grateful to have been part of this fellowship trip.

Here’s what Marcus Loi had to say:
At Fraser's Hill, I had the chance to play with the bow and arrow again. Archery was a sport I try to pick up a decade ago, but gave up half way after some basic training. I have fun shooting the 10 arrows and brought back some bruises as souvenir. My dream to shoot like Robin Hood need to put aside until the next fellowship.


Jack shares his thoughts about the trip:
After a full dinner, we decided to gather at the ladies’s apartment to chat and play games making the night more colorful. Our original plan was to have the Table Topics session but thought it might be better to start the night with some games first. Yvonne suggested to play the number game. It was a simple game but turned out it wasn’t easy as what we thought. Many of us ended up eating lots and lots of BANANAS!!! We managed to finish about 10 bananas (mostly big bananas) that night. I think Sze Ling used up her 1 month banana quota in 1 night. Brrppp…

Since the night was still young, we continued to play the Mafia game. Due to the big crowd, we had three mafias and many civilian. Sze Ling explained the game and Sheen Yee took over and become the narrator then passed it to Boon Wei after 3 games. We had fun accusing and defending each other.  Most of us were tired after the 4th game, we called off the night around midnight.
It was a FUN and MEMORABLE night!

And VK says this about his experience!
I love to watch those movies and play pc games in medieval background. I always thought wearing a full set of shiny armor and riding a horse is very cool. However, throughout my whole life I never get to ride a horse.

During my trip to Frasier, I finally get my chances to ride a horse. Though you don’t get to gallop the horse in the field freely, but it was quite good to experience the horse riding for only RM8.
Mounting a horse take some effort, this is because the horse is definitely taller than a bike. And after you mounting it, it requires certain level of balancing to control your body, and falling down from a horse may cause serious injuries too. Anyhow, I manage to ride it without any problem because the horse just walk slowly around the dedicated compound.

The whole trip took around few minutes and I thought it worth a try for those who never tried horse riding.

Posted by D'Utama Toastmasters Club at 3:47 PM
Email ThisBlogThis!Share to TwitterShare to FacebookShare to Pinterest

D'Utama Toastmasters Club is proud to present to you the following workshop:

"Some Tips on Vocabulary and Grammar" by Dr Devi Menon, DTM 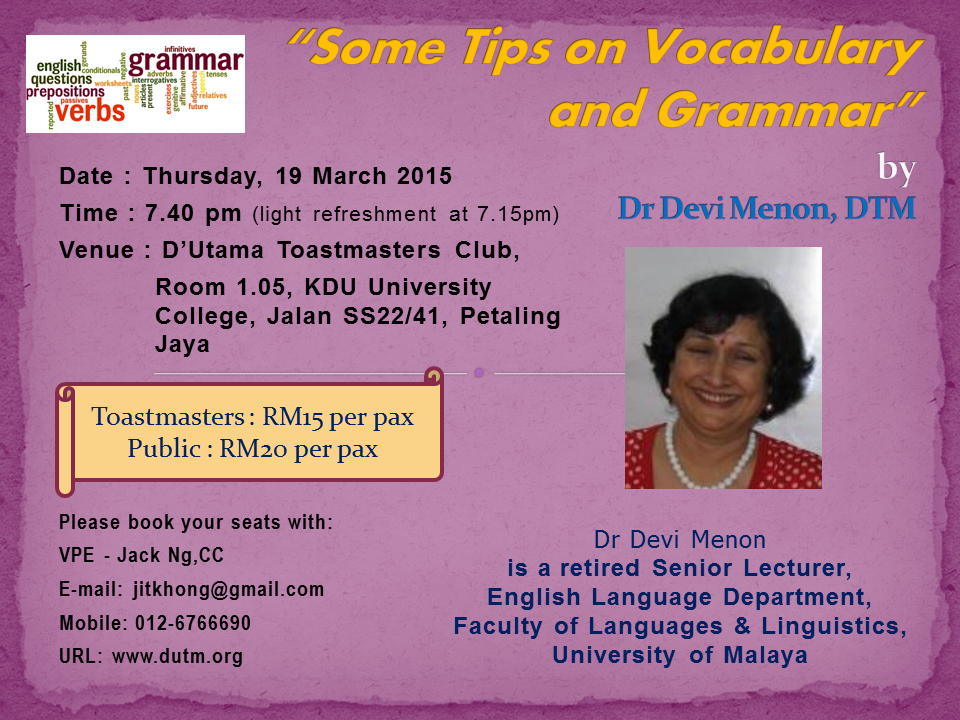 Posted by D'Utama Toastmasters Club at 10:37 AM
Email ThisBlogThis!Share to TwitterShare to FacebookShare to Pinterest

Hope you have had a great holiday. As informed earlier, our next meeting is 5th March which is next Thursday. It will be a joint meeting between DTM Toastmasters Club and D'Utama Toastmasters Club.
We still need role players for the meeting. The roles are:
1. Table Topic Master
2. ASA 1 & 2
3. Ah Counter
4. Timer
5. Speech Evaluator x 1
6. Assignment Speaker - Chai Wen Lee
Please kindly let me know if you would like to take up the role. Hope to hear from you.
Thanks and have a great day!
Cheers,
Jack Ng
VP Education
D'Utama TM
Posted by D'Utama Toastmasters Club at 4:54 PM
Email ThisBlogThis!Share to TwitterShare to FacebookShare to Pinterest
Newer Posts Older Posts Home
Subscribe to: Posts (Atom)