We will have our next regular club meeting next Thursday, 4 June 2015. Yours truly will be the Toastmaster of the Evening for the upcoming meeting.

We still have 2 speaking slots and various roles up for grabs.

Theme of the Meeting: "Excellence is Our Habit, Perfection is Our Goal!"

Teh Tarik for the Soul: Marcus Loi, CC, CL

Please do let me know if you would like to speak or take up any of the vacant roles.

Thank you and have a great weekend!

The 31st AGM was held successfully yesterday afternoon as scheduled.

Similarly, the Annual Report prepared by the Club President and the Exco team were passed and accepted.

Regarding the election of the new Exco team for the next term 2015/2016 commencing 1st July 2015, I am pleased to announce that the following members were elected successfully and democratically as follows :-

The Incoming Exco has been empowered at the AGM to appoint two suitable club members to fill in the 2 vacancies in due course.

The auditors (replacing Boon Wei and G. Levin) elected for the new term are :-

The election process was conducted by IPP Hoo Sze Ling while Allen Kam was appointed as the Returning Officer.  The appointed Parliamentarian was Nancy Liew.  All three members executed their roles and duties professionally and smoothly.

The authorized bank signatories have also been designated for the new term viz. President, VPM & Treasurer.

1.  Whether a speaker should move on to the next project when the objectives of his current
speech assignment are not met as evaluated by the evaluator
2.  Proposal to change the dress code for members when attending club meetings
3.  Proposal to increase the door fee for members and guests
4.  Possible relocation/change of venue for the club's meetings in future was mooted

The Secretary has minuted the salient points of the deliberation and the outcome of the proposals.  Watch out for the minutes when they are ready and made available to members soon to get an insight of the impact or implications of the above deliberations

Congratulations to the Incoming Exco Team led by Jack Ng as the President-Elect.

A vote of thanks was proposed and duly recorded for the outgoing Exco team for their performance this term.

Finally, attendees who stayed till the conclusion of the AGM were treated to a delicious and appetizing dinner at the club's expense for participating actively during the AGM - sharing constructive ideas and suggestions to enhance the performance of the club to the next level.

Appended below are some photos taken during the AGM and dinner for your viewing pleasure :- 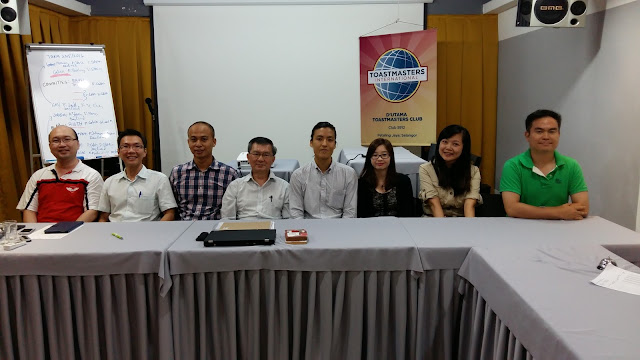 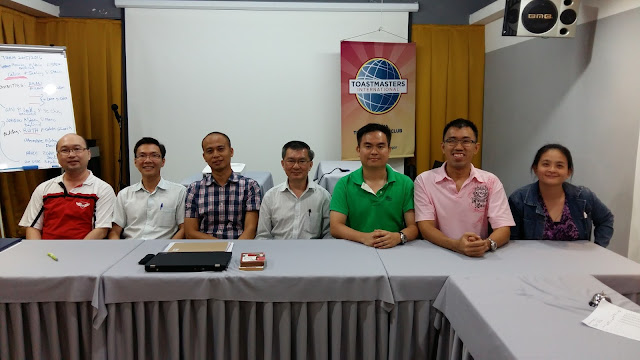 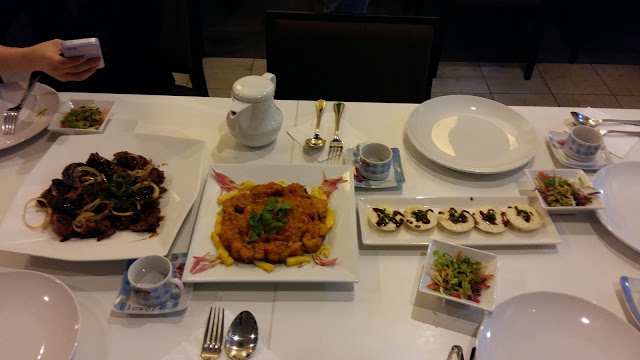 A good spread of appetizing victuals for attendees of the AGM! 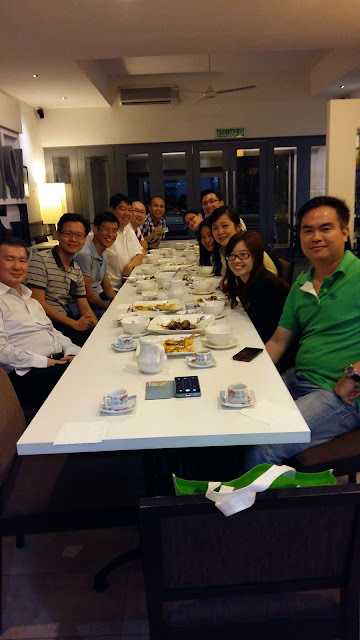 Can you recognize the diners?
Posted by D'Utama Toastmasters Club at 11:48 AM
Email ThisBlogThis!Share to TwitterShare to FacebookShare to Pinterest
Labels: About the Club

The Art of Effective Evaluation - THANK YOU

THANK YOU for attending D'Utama Toastmasters Club's Express Workshop, "The Art of Effective Evaluation" by Robert Ram and our meeting. It was a pleasure to be your Toastmaster of the Evening (TME) & I truly hope you have enjoyed and learned something from that evening.

As promised by our speaker, please find the link to the presentation & bonus materials below:
Materials by the Speaker: http://tinyurl.com/le4rmvh 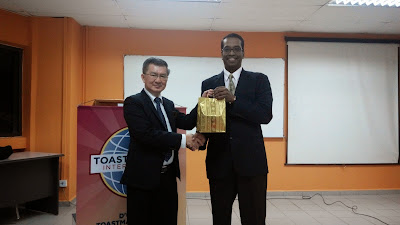 The video recordings' "D'Utama Toastmasters Meeting (21 May 2015)" of that night is also available via the following YouTube channel: TheProVoices.

To keep up-to-date with our latest news and events, please feel free to LIKE our Facebook page: https://www.facebook.com/DUtamaTMC

Feel free to drop-by if wish to our next meeting on 4 June 2015.
Till next we meet, have a fantastic time Toastmastering!

Greetings to you.
On behalf of the Club, we are pleased to share and inform that D'Utama Toastmasters Club will be 30 years old and next month, June we are celebrating this milestone event during our Club's installation night!

Therefore all members are invited to come and support this said event. Please bring your friends and family along.

For more info, please see the poster below: 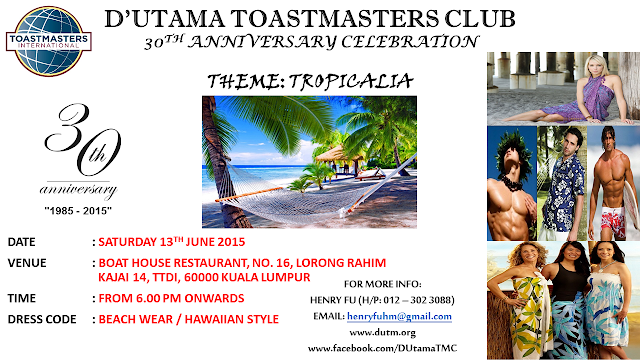 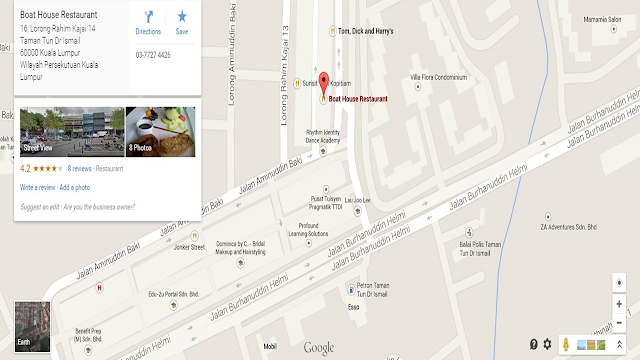 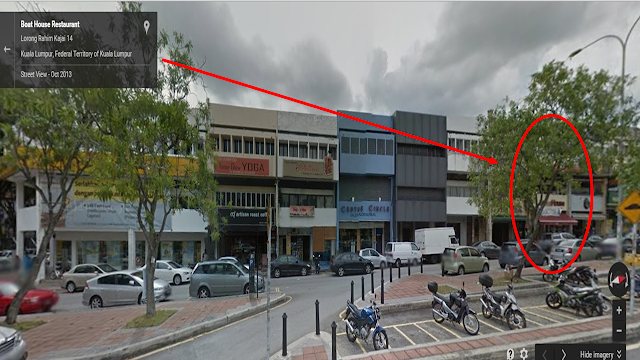 Kindly register early as we will need to inform the chef the number of food to prepare - as to avoid or minimize wastage.

Thank you and have a great week ahead.

Express Workshop: The Art of Effective Evaluation (21 May 2015)

In the Toastmasters community, we recognize that “Evaluation is the breakfast for Champions”. D’Utama Toastmasters Club is proud to bring to you an express workshop on the topic of “The Art of Effective Evaluation”.

Evaluation is not only beneficial to Toastmasters but also to professionals & individual's development. Here are some of the benefits of being effective in evaluation;

Light refreshments will be served before the workshop commences. For us to better manage the logistic arrangements, please click here to register (Update 22 May 2015: Event completed). 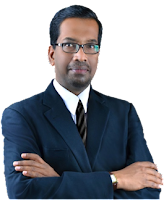 
Professionally, Robert Ram is an Internet Marketing Consultant. He specializes in teaching real estate agents on how to attract more customers via the internet easily. His website www.feastcash.com contains useful advice on how to make money online. He is knowledgeable in PHP, Visual Basic & MySQL programming.

A licensed auctioneer since 2000, Mr. Robert Ram is well sought after on many property related internet forums. Mr. Robert Ram pioneered the use of computer based tools for vastly improving the efficiency of real estate agents in their day to day business transactions in 1999. This novel manner of obtaining up to date & relevant property market information has challenged the traditional manner of real estate agency practices

His website www.betterpublicspeaking.com contains useful tips on how to become a successful public speaker.

Mr. Robert Ram believes in adopting marketing strategies from other industries into his business in order to remain the market leader in his industry. He continues on his quest of ‘doing more with less’ in every aspect of his business.

If you have any queries, please feel to contact the Toastmaster of the Evening, Johnson Yike (jyike78(at)gmail.com)
Posted by J. at 11:04 AM
Email ThisBlogThis!Share to TwitterShare to FacebookShare to Pinterest
Labels: Regular Meeting, Workshops

I hope you all had a fabulous fun-filled time celebrating Mothers' Day over the weekend. Our parents are truly the only ones that has seen us through our individual lives, helping us and molding us from the start so that we can be the person who we are today.

After our parents have laid the foundation, it is then up to us to find opportunities to grow. Our club is one of these opportunities, and from the immortal phrase from the movie 'Jerry Maguire', the theme for our meeting on 21 May 2015 is 'Help Me, Help You!'

We will start the ball rolling by inviting a Special Guest Speaker, Robert Ram, DTM to share about his knowledge, wisdom and experience about "The Art of Effective Evaluation" during the first half of the meeting.  Robert Ram is the current District 51 Champion of Humorous Speech Contest & Evaluation Speech Contest. He was Division E Governor for the term 2012 - 2013, and during that term, Division E achieved 'President's Distinguished Division' status. A humble and dedicated Toastmaster who is ever ready to assist the growth of others.

After the break, we will resume our usual meeting format of Assignment Speech Speakers & Evaluations session.

(Updated 17th May) ALL OPPORTUNITIES HAVE BEEN TAKEN UP! Now it's time to come together, learn new things, meet new friends and help each other GROW!!

Theme of the Meeting: Help Me, Help You!

READY, SET, GO !!!. Till then, keep looking out for opportunities to help yourself by helping others! Have a great week!

Yours truly,
Johnson Yike, DTM
Toastmaster of the Evening (for 21 May 2015)

Notice of the 31st Annual General Meeting on Saturday, 23 May 2015‏

Notice of the 31st Annual General Meeting (AGM) is hereby provided to the club members. The details of the AGM are as follows:

For more details of the AGM, please refer to attachment sent by the Club Secretary on 2 May 2015.

We look forward to your attendance and support in bringing our club to greater heights in the following term 2015/16.

Should you have any queries on the matter matter, kindly contact the Club Secretary or the President. Thank you.

Yours sincerely,
Shawn Chen
Club Secretary - Term 2014/15
Posted by D'Utama Toastmasters Club at 11:17 AM
Email ThisBlogThis!Share to TwitterShare to FacebookShare to Pinterest

We had a great meeting on 30th April. We will do it again next week!

Our next meeting is 7th May 2015. The TME will be our natural humorous speaker, VK Choong, CC

Teh Tarik for the Soul: Argustin Mok