Bringing Down The Curtain: Final Meeting of 2016 - Make It Happen

The meeting was graced by a total of 33 members and non-members alike in what was also a Christmas-themed meeting. A total of 25 members & 8 guests were present during the meeting as it was conducted with a certain glee  and gusto from the Toastmasters of the Evening (TME), Lim Bing Yee, ACS with her theme of the evening, Make It Happen.

The meeting started on time at 7:40PM and was called to order by the acting ASA-2 of the night, Jo Chung, CC as she led the room to a club customary practice, singing of Negaraku -- the Malaysian national anthem --, and getting guests to introduce themselves. 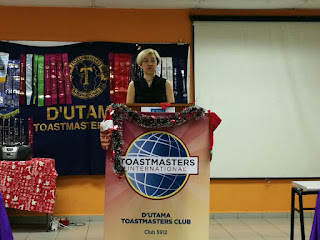 ASA-2 of the evening, Jo Chung (CC), calling the meeting to order.

The acting president of the evening, Azlan Hateem (TM), who is also the current club Vice-President of Public Relations then took over to deliver his address to kick-start the meeting. In his delivery, he spoke about his 2016 and what he made happen during the year. He further inspired the crowd with his take-away message of to constantly keep on moving and keep making things happen in the future. 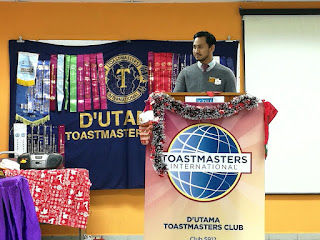 The meeting then stepped-up one gear as the lively Toastmaster of the Evening (TME), Lim Bing Yee (ACS) took control of the meeting. Always living in the realm of the unpredictability, she got the crowd moving when she requested everyone in the audience to stand up and give high fives among each other as an energizer. The word of the day, "Stereotype", was then introduced by Palash Ray, the Language Evaluator (LE) of the night. 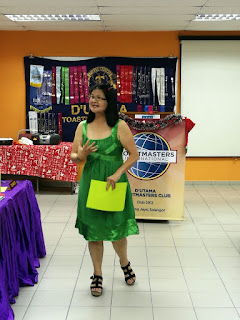 "I wish I could fly." Toastmaster of the Evening (TME), Lim Bing Yee (ACS), making it happen.

Keeping things moving, the TME then introduced Jan Siong Lim (TM) to carry out the role as Table Topic Master (TTM) of the evening. Four valiant speakers, Kris Sonsin (CC), Geena Poon (TM), Palash Ray (TM), and guest Adzenser took the challenge and delivered their take on the topics presented by the TTM in splendid fashion.

The meeting then proceeded to honor a club tradition by conducting a new membership acceptance ceremony. Dionnald Beh, a recently joined Toastmaster, was given his club handbook and was presented the customary guard of honor by both members and non-members alike. 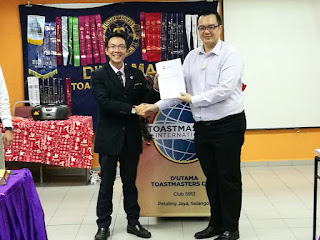 "I didn't expect this, but this feels nice" whispered Dionnald to himself whilst standing proudly beside the club president.

Just like any other D'Utama Toastmasters meeting, this too promised not to be a dull one. Never one like the other, the audience were presented by a short skit performed by the TME & club VPPR, Azlan Hateem. The hilarious skit, featuring Bing & Azlan was intended in announcing to the members of the club of an upcoming overnight trip to Port Dickson in the month of January 2017. The meeting then went a short break before heading into the second session of the night, the prepared speeches session. 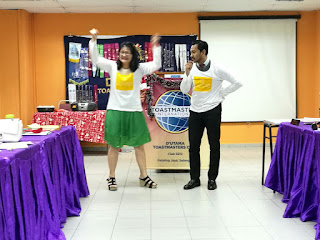 An acting career is imminent for both Toastmasters.

Moving on to a more serious part of the meeting, the prepared speech session featured four speakers in which three speakers attempted from the Competent Communication (CC) Manual, and one from the Advanced Communication (AC) manual - Special Occasion Speeches. 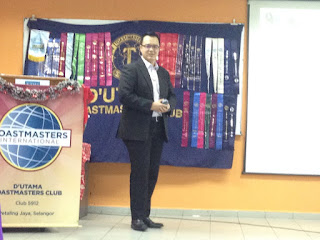 Prepared Speech Speaker #1 - Dionnal Beh, TM: I Am a Keyboardist and Mousist 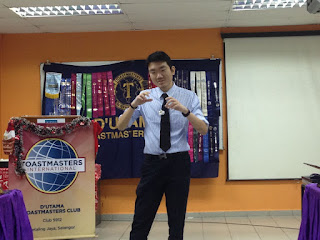 Prepared Speech Speaker #2 - Reuben Thum, TM: Fantastic Pieces and How to Craft Them 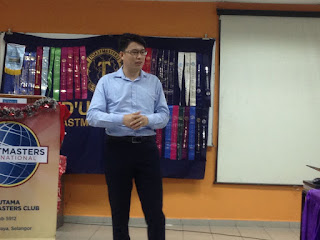 With every speech comes and evaluation. The General Evaluator (GE) of the evening, Steven Lai (CC, CL) [a.k.a the serious reindeer], took control of the meeting at 9:26PM to lead the evaluation session together with his team of evaluators. The esteemed speech evaluators of the night were Ryan Tang (TM), Lim Mei Ching (TM), Chai Wen Lee (ACB, CL), and Allen Kam (ACS, CL) respectively. The technical evaluators consist of Palash Ray as the Language Evaluator, Kris Sonsin (CC) as the Ah-Counter, 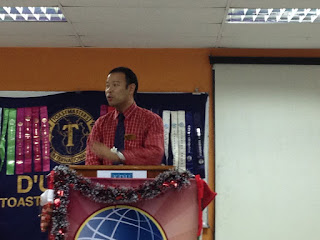 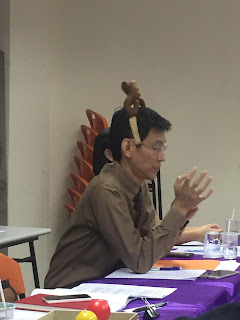 We weren't lying about "The Serious Reindeer" part.

The meeting ended with the award-presentations session to the best speakers of the night and was closed off by club president, Chan Yew Choong (ACB), as he delivered his final presidential closing speech of the year 2016. The group then gathered together for one huge group photo to wrap up the year. 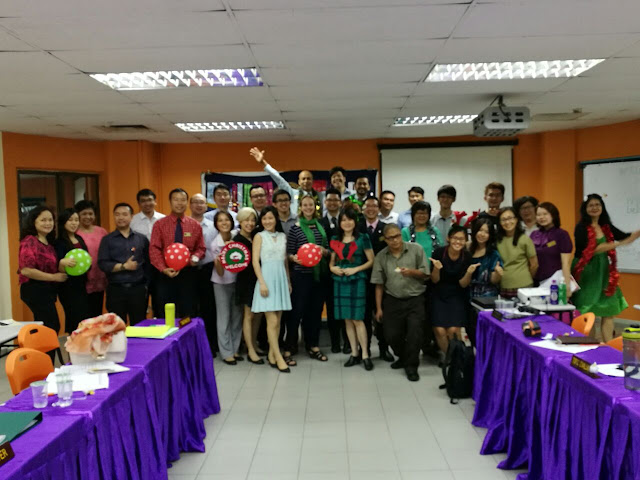 Meeting fun fact: There were a total of five mother-and-son combo in the meeting tonight. A club record for sure. D'Utama, a club for both the young and the seasoned.

Overall, it was a great ending to the year for D'Utama Toastmasters Club as we look ahead to further carry the spirit of camaraderie, fellowship, and family onto the year 2017. But that's not quite the end.. 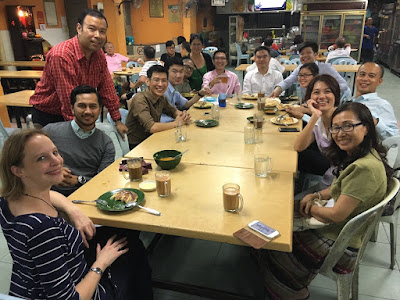 Supper club. No meeting is complete without supper club. Wishing everyone a very merry Christmas and a happy new year. See you next year, adios! - D'Utama Toastmasters Club

P/S: To view the complete album from the meeting, visit our Facebook page @ https://www.facebook.com/DUtamaTMC/