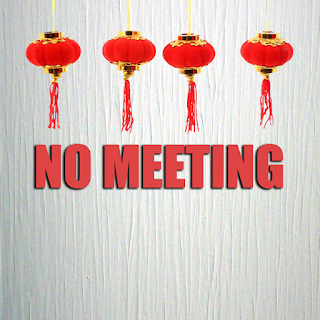 In conjunction with the Chinese  New Year celebration, there will be NO MEETING this coming Thursday (2 February 2017).

We would like to take this opportunity to wish everyone happy holidays and to be safe on the road no matter where you are during this festive season.

Meeting will resume on the 16th of February 2017 as we conduct a joint meeting with MIEA Toastmasters Club. Details of the meeting will be furnished further as we move closer towards the date.

The Fellowship of the Bing 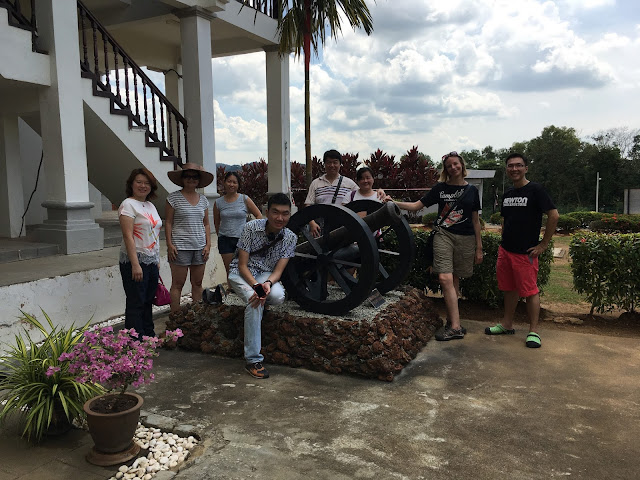 12 brave adventurers rose,
To the challenge Bing proposed,
For her knowledge of nature is vast,
For her love of nature unsurpassed.

Azlan helped in organizing this,
He’s fit but blazer no longer fits,
Was at a wedding to give a speech,
Was late but just in time for the beach. 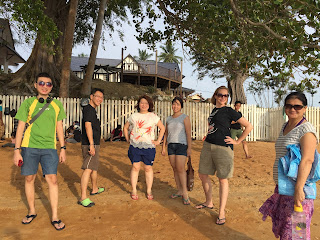 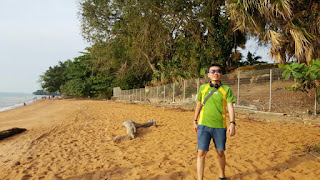 Wee Hao can’t make it but joined in spirit,
11 companions now, so be it,
Reuben is in charge to write this whole thing,
They shall be — the Fellowship of the Bing.

Port Dickson seems to
Have a lot of Stops and Gyms;
“Gotta catch ‘em all.”

The Return to the Kin (Villa) 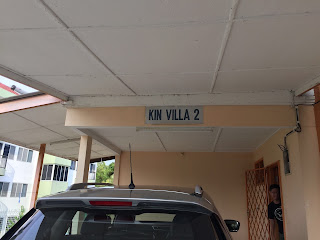 January 14th when they set forth,
PD from KV — opposite of north,
Dunkin’ Donuts where they wanted to meet,
Three rides initially to form the fleet.

Lukut Museum was their first stop,
The fort can be found right at the top,
Ample history from tin mining,
To arts and crafts and canons and kings. 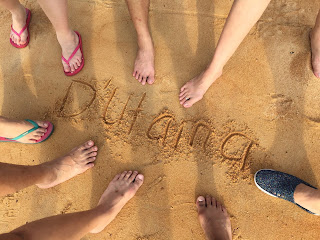 Weather so scorching Chun Ming donned a hat,
Then to Lucky King Bun for lunch and chat,
Washed it down with some ais kacangs,
After which, no more hunger pangs.

Checking in at the Kin Villa 2,
Bungalow so huge it has five loos,
Afternoon tea in the living room,
Azlan arrived before sunset looms.

Strolling by the seaside to catch some sun,
Beach was stony but skipping them was fun,
The fellowship tried the body alphabet pose,
Tried “D’Utama” but didn’t even come close. 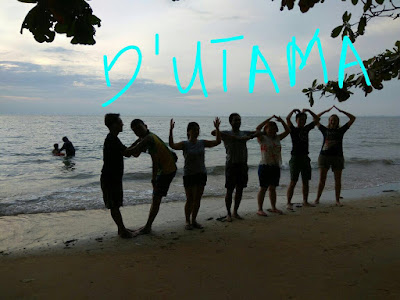 Johnson, Paulyn was out and gone,
Came back with a bunch of Rhyhorns,
Jack soon arrived a little later,
In time for Jimat Tomyam dinner.

Food was good and fresh was the produce,
Kris said no one mixes milk with juice,
Juices ordered came in a jar,
Yew Choong got locked inside Bing’s car. 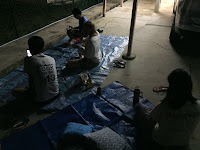 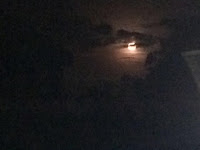 Returning to the Kin Villa after dinner,
The fellowship sat by the porch for more chatter,
Sitting, staring at the waning gibbous moon,
When tired, they all retreated to their rooms. 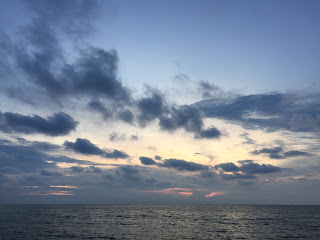 Port Dickson’s great with
Sun and sea and friends and fun;
“Where the heck’s Reuben?”

Morning run canceled due to downpour,
‘Cause Azlan jinxed it the night before,
Off to a stall for some coffee and tea,
Everyone had their fair share of roti. 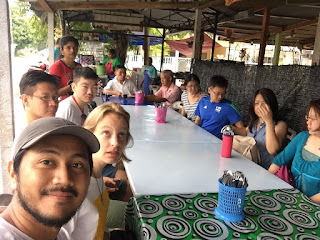 Tanjung Tuan a jungle untouched,
The hike up top, they enjoyed it much,
Nice to be able to get out of the city,
As the spectacled langur watched them curiously. 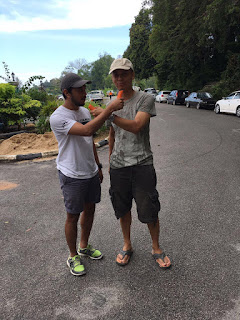 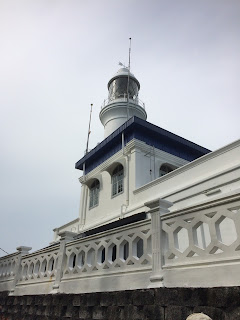 The Portuguese lighthouse’s 500 years old,
The Dutch and the British, they came and they stole,
A new structure built has huge radar gun,
That’s like two towers for the price of one.

The trees and the birds, Bing assigned to name them all,
Reuben took it too seriously and went AWOL,
They spied with their little eyes across the Strait,
“That white horizon’s Indonesia,” Bing said. 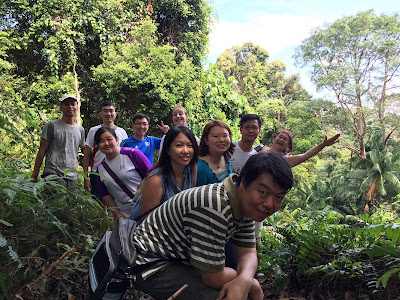 Savoring watermelon within nature’s riches,
While playing Taboo and Charades left them in stitches,
Remember to ask Jack during next congregation,
To do Donald Trump and Michael Jackson impressions.

Back to the bungalow they’re ready to go,
Reuben won a watermelon and mango,
For “helang lebah’s” binomial nomenclature,
Jack’s last to arrive, first to say, “See ya later!” 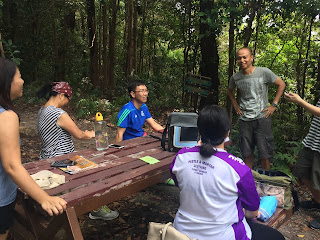 To Teluk Kemang Observatory,
Its telescope’s largest in the country,
After luncheon at Double Queue Thai,
Port Dickson, it’s time to say goodbye.

Port Dickson smiles at
D’Utama Toastmasters,
“We’ve made it happen!” 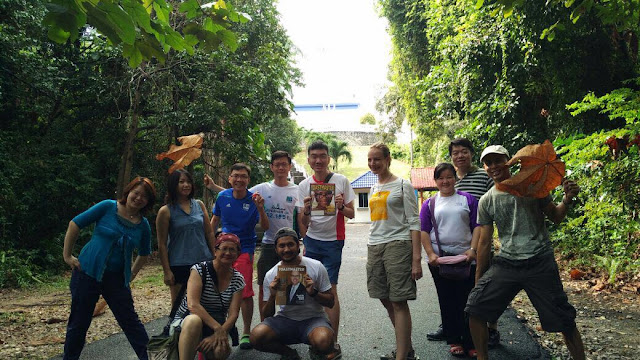 What a night it was! 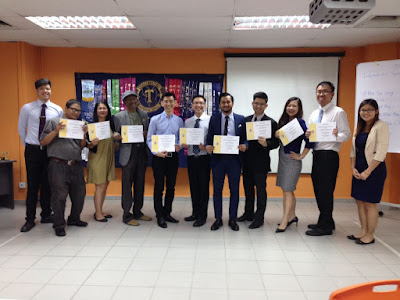 The participants charmed and dazzled the crowd and judges alike in what was an entertaining night for all. However, only one can be crowned champion. It proved to be a night full of learning and laughter as the participants gave their all during the contest. 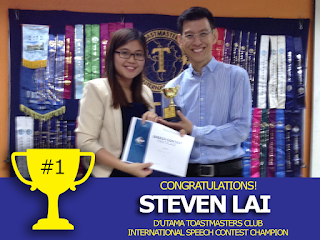 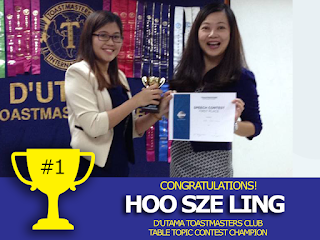 The top 2 winners of each category will be representing the club at the area level. Congratulations to all winner !

Dear members and friends of D'Utama, 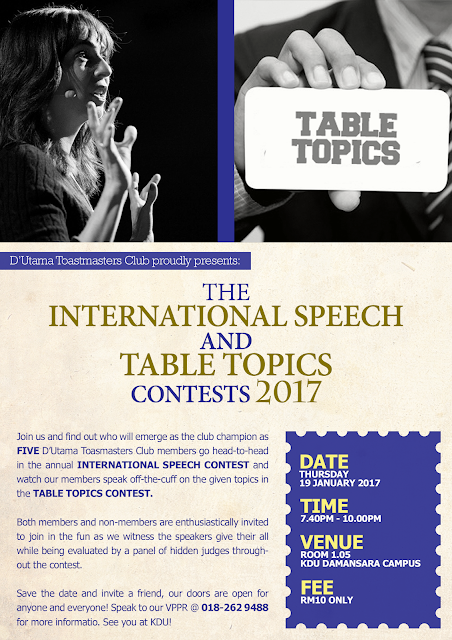 D'Utama Toastmasters Club will be holding the club level International Speech & Table Topics contests next Thursday, 19 January 2017.
We have speakers lined up for both contests and are eager to find out which Toastmaster will emerge as this round's champion and represent D'Utama in the Area level!

There's only one way to find out which is to be at Room 1.05 KDU Damansara Jaya next Thursday together with us and witness the members give their best in front of the judges!
Posted by Unknown at 9:08 PM
Email ThisBlogThis!Share to TwitterShare to FacebookShare to Pinterest
Labels: Contest, Contest - Intl Speech, Contest - Table Topic 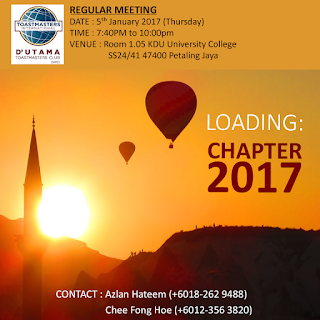 We have now arrived at yet another chapter of our lives and despite whatever that has happened yesterday, nothing ever stops and here we are, getting yet another chance to rewrite our destiny. Here at D'Utama, we're certainly a big fan of beginnings as we open our year with a regular meeting this coming Thursday!

The meeting will feature the extremely vibrant and cheerful D'Utama Toastmasters member, Hoo Sze Ling, as the Toastmaster of the Evening (TME)! She has chosen the theme "Loading Chapter 2017" for the upcoming meeting to open the curtains to what we hope to be another great year for the club.

On Thursday, we will be having four (4) prepared speeches with one of it being a prepared speech from the Advanced Communication Manual. Also, on the cards for the evaluation session will feature a Distinguished Toastmaster (DTM) as one of its evaluators.

If you're reading this, know that you are invited to come to the meeting be it as an existing Toastmaster from other clubs, or just as a guest wanting to know how Toastmasters work. Either way, we sure hope to see you this Thursday ;).