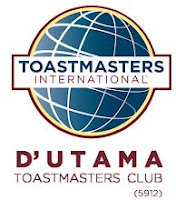 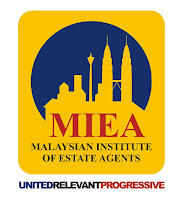 
D'Utama held a joint meeting with MIEA Toastmasters Club on the 16th of February 2017. The word "reunion" carried many significance to the meeting that was held last Thursday such as:

1. It was the meeting's Word of the Day
2. It was a reunion for D'Utama TMC's members after a period without a club meeting.
3. It was the return of an ex-member of D'Utama, Billy Low (current President of MIEA TMC)
4. It was the coming together of two close clubs as D'Utama TMC were the sponsor club of MIEA TMC during its inception.

The meeting was attended by a total twenty (20) members and non-members alike and had a great mixture of members from both clubs in the audience. The Toastmaster of the Evening (TME) role was carried by D'Utama's very own VPE, V.K. Choong with the theme of his choice, Homecoming Night.

The meeting began at 7:45PM and was called to order by the ASA-2 of the night, club past-president, Gan Teong Hock, as he led the room to a club customary practice, singing of Negaraku -- the Malaysian national anthem --, and getting guests to introduce themselves. He then handed over the control to club president, Chan Yew Choong, to deliver his opening address. He inspired the crowd by sharing a story of his journey in Toastmasters and how he slowly climbed up the ranks before eventually becoming the president of D'Utama TMC. His takeaway message was to never stop moving forward as sometimes life has something planned for you that might not be obvious at the present moment. 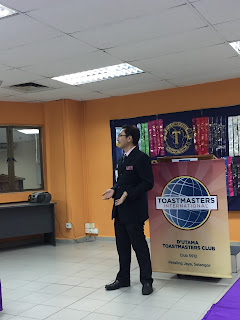 Club President, Chan Yew Choong, inspiring the audience with a sharing of his Toastmasters journey.

The control was then handed over to the Toastmaster of the Evening (TME), V.K. Choong, who is also current term's vice president of education (VPE). He proceeded to highlight a few changes in the agenda and shared about his selection of the theme for the meeting by introducing Billy Low, the President of MIEA TMC, who was once a D'Utama TMC club-member. 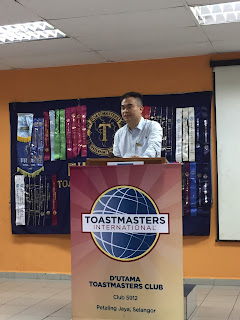 The word of the day, "Reunion", was then introduced by Steven Lai, a D'Utama TMC past-president, the acting Language Evaluator (LE) of the night before going into the Table Topics session led by Kris Sonsin, who is also club's current term EXCO member serving as the secretary. 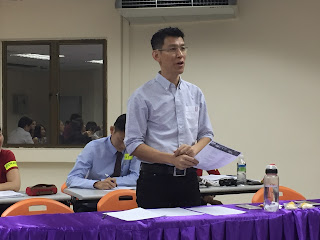 Past president Steven Lai, anchoring the role of Language Evaluator for the night. 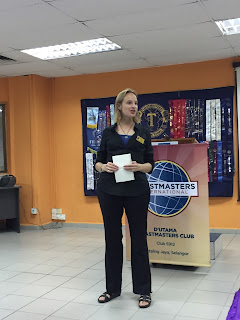 The table topic session was partook by five (5) gallant volunteers. The five speakers were Gan Teong Hock (D'Utama TMC), Agnes Chan (MIEA TMC), Azlan Hateem (D'Utama TMC), Billy Low (MIEA), and a guest participation from Jonathan Boudville. Theme of the session was closely knitted around the topic of "reunion" and "teamwork". Some were funny, some were serious, but no doubt all speakers were capable of speaking off the cuff. The speakers were then evaluated by the Table Topics Evaluator (TTE) of the night, Calvin Lim, ACG. 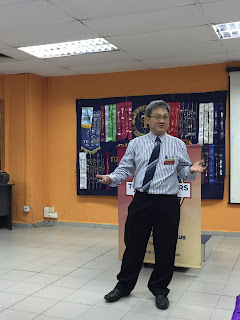 Past-president Gan Teong Hock, the first volunteer of the evening. 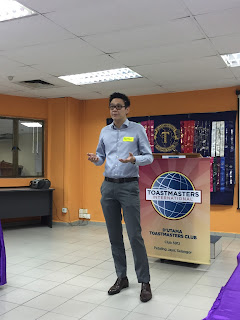 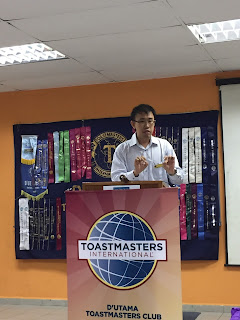 The TTE of the evening, Calvin Lim, sharing his thoughts on the table topic speeches.

The TME then surprised the audience with an impromptu humor session. He entertained the audience by sharing a joke about Bill Clinton and his unwillingness to spend money for finer things in life. 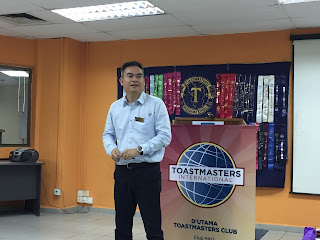 A master stand-up comedy in action, V.K. got the whole room laughing with his humorous story.

The meeting then went for a 12 minutes break beginning 8.28PM before resuming at precisely 8.40PM. The ASA-2 of the night picked up where the meeting left off and handed the control back to TME. The TME, V.K. Choong, then went on to explain about how to become a D'Utama TMC member. Guests are to attend three (3) club meetings in the space of two (2) months before being eligible to register as a D'Utama TMC member. V.K. then elaborated further about why such mandate was imposed in D'Utama TMC. 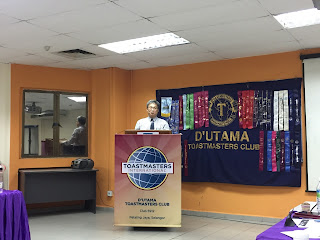 Gan Teong Hock, picking up where we left off.

Without wasting time, the meeting then entered the prepared speech session in which four (4) speakers attempted speeches from the competent communicator manual. Three speakers were from MIEA TMC meanwhile D'Utama had one speaker for the night. The three speakers from MIEA TMC were Agnes Chan, Stephanie, and Juliana Teh meanwhile Reuben Thum attempted project 3 of the CC manual. 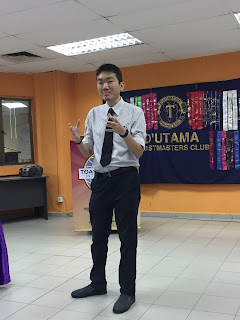 First prepared speech speaker of the night, Reuben Thum, with a marvelous speech about the beauty of writing. 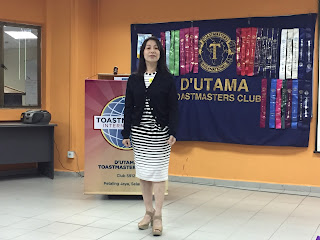 Agnes Chan of MIEA TMC, charmed the audience with her uplifting speech entitled "The Three-Legged Dog" 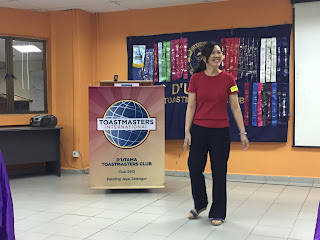 Stephanie of MIEA TMC, sharing her story of being underwater through her speech, "The Loving Sport" 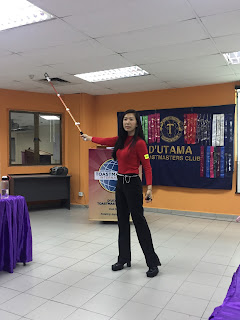 Showing how it's done. Juliana Teh demonstrating the many varieties of selfie techniques during her speech entitled "The Importance of Selfie"

No speech in a Toastmasters club will be complete without an evaluation. Leading the evaluation session was a distinguished guest, Sue Ding (DTM), who is currently the immediate past district governor. Under her roster, was an excellent lineup of evaluators who provided concise and compact feedback to all the speakers of the night. The technical evaluators who obediently performed their duties throughout the meeting were Steven Lai (Language Evaluator), Serene Tan (Ah-Counter), and Leong Wee Hao (Time Keeper). 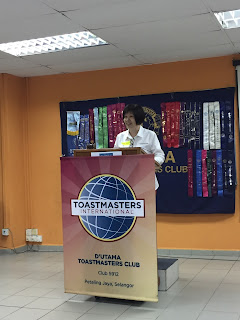 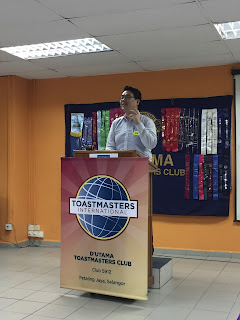 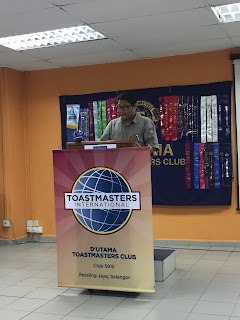 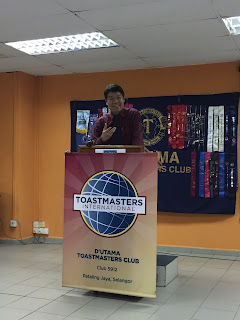 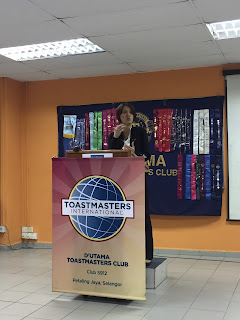 Left: Distinguished Toastmaster, Johnson Yike, giving his insights and shared some room for improvement on Stephanie's "The Loving Sport"
Right: Chai Wen Lee (ACB), sharing her thoughts on the final prepared speech of the evening, "The Importance of Selfie"

The meeting the proceeded to the award presentation session. The winners for the night were: Billy Low as the best Table Topic speaker, Agnes Chan as the best Prepared Speech speaker, and last but not least, Johnson Yike as the best Speech Evaluator for the night. However, that's not all. It was a special night as D'Utama's very own club secretary, Kris Sonsin, was awarded with her Competent Leader title after completing her Competent Leadership manual. Bravo, Kris! 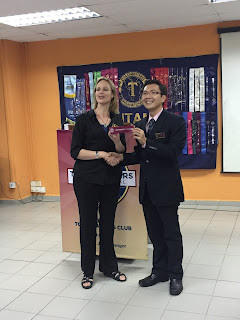 The meeting was then closed off by Billy Low, the president of MIEA TMC. It was only fitting for the meeting to start and be closed off by the two presidents as the meeting proved to be a successful one. Members of both clubs got to know each other better and we are definitely looking forward to the next joint meeting with other clubs as well.

We are happy to announce that our next meeting will be held on the 2nd of March 2017. All are invited, do join us!